San Francisco is home to the Sony PlayStation store, and for last two days it has also been home to something else: the hardcore. Over 750 people were lined up and waiting outside the Metreon when the PlayStation store started its midnight sale of the PS3. Some people getting in line as early as Wednesday at 5 a.m. By 11 p.m. on Wednesday, the line had become 300 deep. Always fashionably late, I grabbed my camera and headed down to try my luck. Arriving around 1 a.m. early Thursday morning, I didn’t think my chances would be that good of getting a system. But rumors were flying like bullets in a gang war, and the one that convinced me to stay was that Sony had at least 400 hundred units available. So began the next 27 hours of my life, in line, and written down and photographed for you, my D-toid readers.

The madness begins after the break. (This is a long post)

The other day I gave you the supposed breakdown of what to expect if you were headed to the Sony store in San Francisco. In it I said that there would be no camping allowed. I was halfway right. Sorry. There was no camping allowed on Metreon property, but you should never come between a gamer and his system. Intrepid gamers had lined up on the adjacent street in hopes that their unofficial line would soon become the “official” one. I caught wind of this at 11 p.m. on Wednesday night and had a friend in the area check it out for me. Bad news. 300 hundred people had already pitched their tents and claimed their spots.

Around 1-ish on Thursday morning I decided that I was going to get in line. Below is a pic of the ass-end of the line and my starting point. Even though it was believed that there would be around 400 units, Sony has been notorious for screwing their customers and giving false information. But what the heck, right? 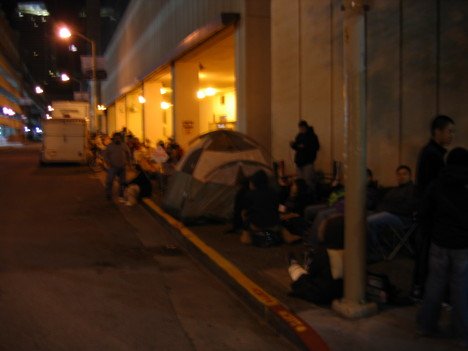 After an hour or so, it was just more waiting. About twenty more people had lined up behind me since I got there. Some more prepared than others. All I had with me is my camera. At this point I had decided to make the full commitment and stay no matter what. Thankfully my girlfriend was there with me (and if you’re reading this honey, you’re the bestest girlfriend in the whole wide world). She took a cab back to my house and then brought me back the supplies I would need to survive this mess.

Now it’s 3 a.m. and it’s getting colder. I know San Fran doesn’t get as cold as other places do, but sitting out in the open at three in the morning anywhere sucks. People more prepared than I were sleeping in their tents and sleeping bags. I’m sitting in my chair with a blanket and eating Wheat Thins. Soon word travels down the line that a list is going to be made. Two guys near the front of the line had heard about all the problems other stores had had with fights and people cutting (Cali is 3 hours behind New York ya know?). So they took it upon themselves to make a list with everyones name on it. They walked the entire length of the line and had people write their names in numerical order so that if anyone tried to cut in they would have something to show security. This list may not sound like a big deal, but at the time it really eased some of the tension. The list eventually topped out at 505 people. Below is a picture of the two guys and “The List”. Thanks guys. 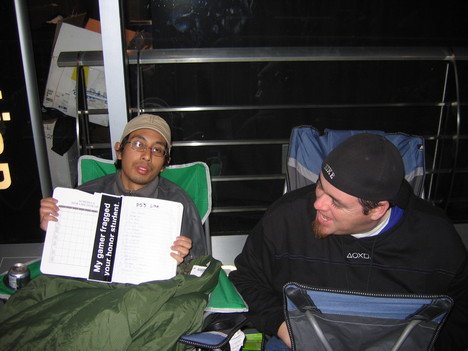 At around 4 a.m. security does a head count. At 4:30 a.m. security does another one and I asked how many people are in line, the security guy says “Guess?”  I said 430, and he said “Real close.” Twenty minutes later they put up a barricade behind the last person in line and then told us that everyone in front of the barricade is GUARANTEED a system. I rule! They then asked that we police ourselves in case people try to cut. Did I mention there was a list? I think I then slept for two hours. Maybe.

Jack sh*t happens for several hours. The only highlight is that some homeless idiot serenaded us with a bad mash-up of Stand by Me and Lean on Me. Thrilling. The closest Starbucks opens at 5 a.m. Coffee ensues. 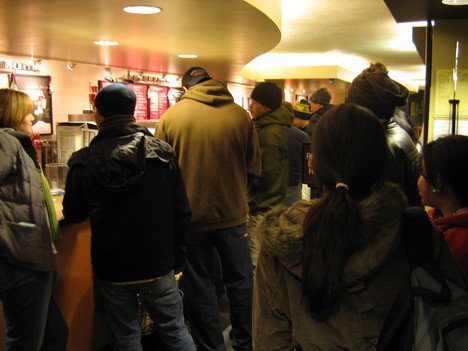 Eight o’clock. the “official” line is about to start. So far, everyone has been really cool and security has been looking out for us. A large chunk of the front of the line gets moved over to 4th St. We move forward, but we’re still stuck on Minna St.

9:30-ish. Finally, bracelets! Now our success is guaranteed. We’re given our choice of a free coffee or hot chocolate. I chose a hot chocolate and then passed out. 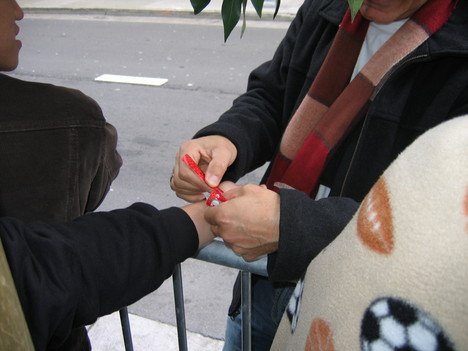 Sony made a huge deal of delivering the PS3’s during my nap. All I remember is wishing that those G*dd*mn police sirens would shut the h*ll up. Sony kindly provides us lunch (1:45 p.m.) in the form of free burritos. With the good comes the bad and it starts to rain. I run around and take some more pix. To their credit, Sony also gave us free poncho’s. 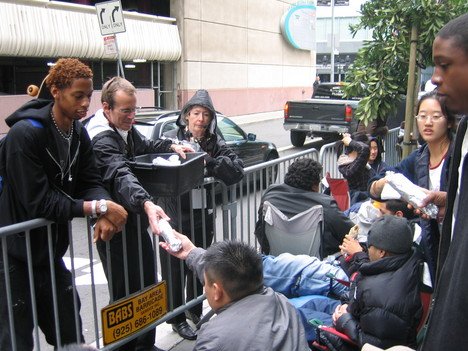 We stay exactly where we are for about the next eleven hours. I’ve already made friends with the people in front of me and behind me. We always leave at least one person at “camp” when we walk around or go to the bathroom. I’m not sure, but I think I fell asleep. All I remember is that there was a cold cheese burger waiting for me when I regained consciousness.

By late afternoon on Thursday, the entire line has turned into a close-knit group of people all trying to achieve the same goal. This shared goal seems to make friends out of strangers. The Red Bracelet of Sony allows you to come and go as you please within the ranks. Utilizing this, I met and talked to a lot of people, and also got pwned at DS Tetris.

During the latter part of Thursday (4 p.m. – 10 p.m.) I mostly hung out with the “crew” and watched as Sony built a a big stage for the evening events. By the time the media circus began (9 p.m.?) about 90% of the people in line couldn’t have given a rat’s ass about the Sony hype machine. Angels and Airwaves played a show, local reporters earned their paychecks, and the IGN and 1up.com crew were visible, but all anyone cared about at that point was whether or not they’d get a 60Gig. Below: The “crew.” 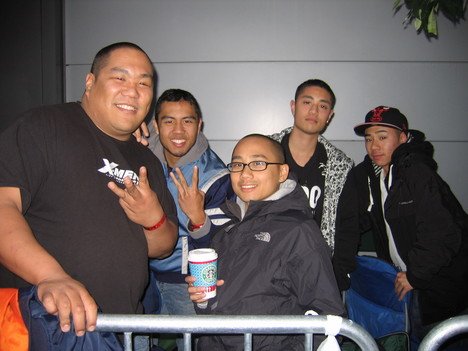 After the band came and went, it was just an another exercise in patience. Sony had put up a huge TV displaying a countdown to midnight. We were still on Minna. Over the last sixteen hours we had become intimately familiar with the street and all its nuances. My girlfriend had come back with fresh made cookies. The media had taken off and the giant Sony clock was getting closer to midnight. Even though we had wristbands, we still weren’t sure we’d get a system. A few Sony bitches models gave us misinformation causing us to worry.

Hooray midnight! The 60Gig question comes back into play. I haven’t spoken to a single person yet who says they’re not going to sell theirs online. Earlier in the day, a nice media person informed us that there were 750 units available. Hope springs eternal. Even though the line was now valid and moving, my friends and I were still #400 or so. It’d take awhile.

Finally got to the front door of the store. The line was moving at a pace a snail would laugh at. So close, yet so far. It’s 3:30 a.m. on Friday. 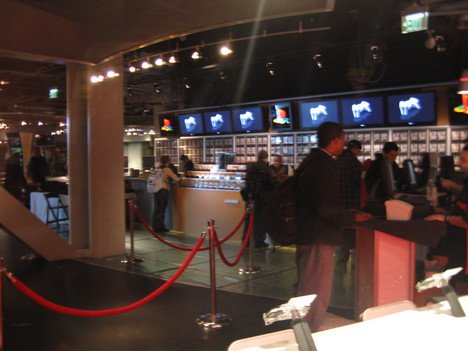 Success! We posed for a picture and wept tears of pain. 27 hours of pain. The group   I’m with, myself included, was delirious with fatigue, but elated with our new purchase. A 60Gig PS3. 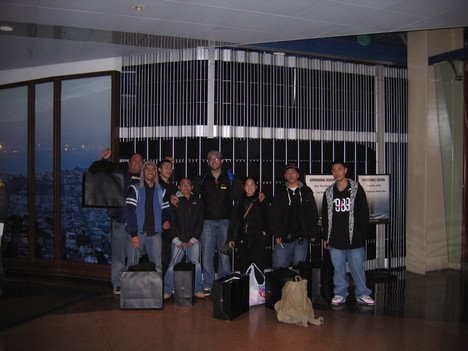 After that ordeal, I can honestly tell you that I will never wait in line for another system again. I did enjoy the experience and met many cool people, but the toll it takes on you is tremendous, and I was only there for 27 hours. I crashed so hard after getting home I still can’t remember my own name. Imagine what the first person in line felt like, he pulled a 43 hour shift! There were many other funny and sad things that happened that day, but I think that I’ve given you a pretty good overview of it was like to do it like a true gamer. Sony did do a good job of taking care of us with free food, and their personal security was working overtime to make sure we didn’t get screwed with. If you were there that day you should check the images below. You might see yourself.