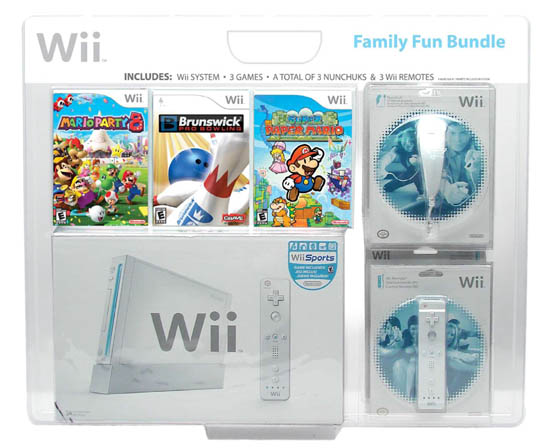 We’re less than a week away from the beloved/dreaded Black Friday, and we’re already witnessing crazed gamers and soccer moms fretting over Nintendo Wii availability. Hey moms, little Timmy is going to be pissed if you don’t get him one. You had better do your research.

Sam’s Club chimes in with some help to gift givers: starting November 23rd, the company will offer a Wii Family Bundle, which contains the console, a grand total of three Nunchucks and Wii Remotes, the console pack-in Wii Sports, as well as Super Paper Mario, Mario Party 8, and Brunswick Pro Bowling. This grouping seems pretty well-rounded, and the whole family should dig at least one of the games. Note that this bundle is a special deal that Sam’s Club worked out with Nintendo, and after these are sold, no more will be made available.

There is a limit of one bundle per member for those sold from 5:00 a.m to 7:00 a.m on Friday, November 23rd. After 7:00 a.m., members will be allowed to buy up the remaining units. While a membership is needed to purchase a bundle online, non-members can purchase one in the stores, though a fee applies.

We tried our best to get a price for the bundle, but they’re keeping that under wraps for now. Sam’s Club did tell Destructoid that there will only be two pallets of these bundles per store, so if you’re thinking about scoring one, you had better get in line after turkey time!