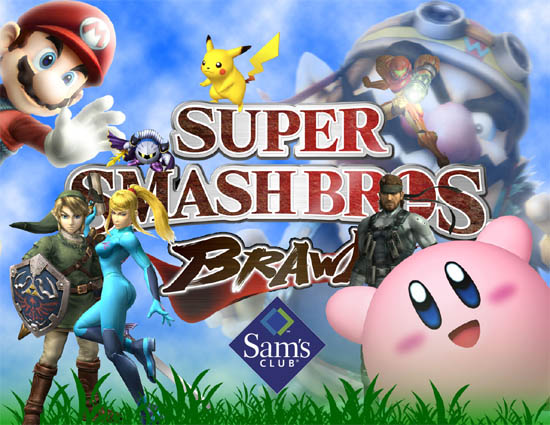 We totally dig that Sam’s Club is stepping up their game when it comes to videogames, and now they send word that a Super Smash Bros. Brawl midnight launch is in the works.

The retailer will open up all US stores on March 9th at midnight to sell Super Smash Bros. Brawl. What’s even better is that they’ve lined up a price of $43.66 for the game. The event will run until 2:00 a.m.

Sam’s Club games buyer Joe Muha tells us, “Folks should come to Sam’s Club as we will be the first place that they can buy it in their community. Additionally, we will have at least 20 units of Wii hardware at each club for the event.”

That’s really convenient for those gamers that have been holding out for this game’s purchase to pick up a Wii.

On top of all of this, they also send word that Rock Band will drop in price to under $150. If you haven’t picked it up already, this will save you a fair bit of money on the bundle.

More on Sam’s Club’s and gaming after the jump.

“Membership makes sense for hardcore gaming fans and Sam’s Members have known this secret for a long time,” says Muha. “We want to do our part to let the secret out to your readers. If that gaming Member responds to events like this, we believe we can do more of them to offer great savings first in their communities.”