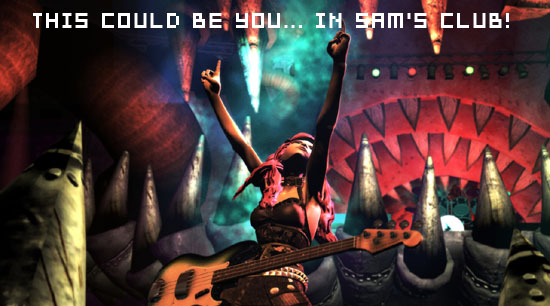 Sam’s Club was once a store you’d visit infrequently to procure 188-pack bundles of prune diet bars and a small mountain of toilet paper (to be used conjunctionally, of course), but it seems that in recent years they’ve been stepping things up in the game space. One positive move is the announcement of a Rock Band midnight launch event for some of their locations. Way to go, Sam’s Club!

Six Sam’s Club locations in Florida will be opening their doors at midnight on November 20th to kick off a Rock Band launch party. There, members will be able to rock out with faux guitars and drums, and then bring home the bundle for themselves. The event lasts until 2 a.m., and it will be offered in the following locations:

Knowing that Sam’s Club regularly has lower prices on games and consoles, we did our best to pry a price for the Rock Band bundle out of them. Unfortunately, we had no luck, but Sam’s Club’s Joe Muha did tell us that we would be “pleased with the price.”

Hopefully they’ll be able to branch out past Florida soon.