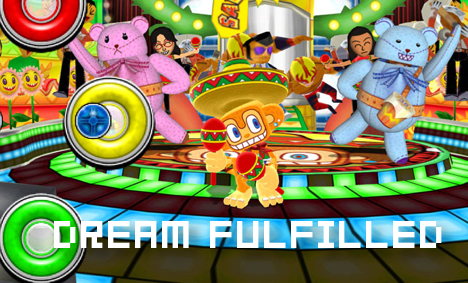 Confirmation is pretty easy to get if you have the rumored equipment in your hand, while standing next to a spokesman at an official event. It wasn’t me with the maracas, but Gamekyo’s recent trip to the Samba de Amigo section of the Japan Expo revealed the peripherals in action. Even better, the Sega spokesman at the event confirmed that the game would ship with the two colorful attachments that we questioned last week.

An interesting aside to this is that Samba de Amigo can also be played with just the Wii Remote. So, perhaps that bundle we caught a glimpse of was like a Rock Band version of Samba de Amigo. Hopefully, we don’t find ourselves on Sega’s customer support line a few hours after release because the attachments snap in half.

I have to say, I’ve been getting the rhythm twinge again after covering this game. While I probably will not display my awesomeness with maracas in front of a crowd, or even a friend, I wonder just how fun Samba will be. Are you guys going to snatch this up when it hits this August? Or is this just looking like an attempt to display what acid does to the brain after years of excessive use?