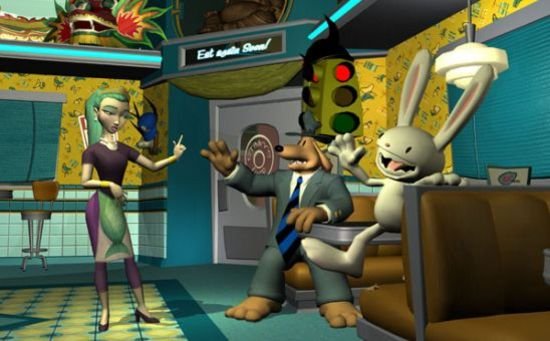 I am not an exclamatory sort of guy. I rarely, if ever, choose to exclaim things. And even when I do, I usually never go through the trouble of adding an exclamation mark, instead letting the period (and all the cool, dispassionate indifference it represents) do my punctuating for me.

It is with a great deal of pleasure, then, that I report that Telltale Games’ episodic Sam and Max games have been renewed for another season! According to Telltale’s press release,

“Season One was a great success, but it’s just a starting point for us,” says Telltale’s CEO Dan Connors. “The episodic model presents so many opportunities to innovate and engage the audience in brand new ways. Just wait until you see what Telltale and GameTap have in store with Season Two.”

Since Season One was hilariously awesome (albeit a bit too easy and confined), it’s good to know that the team will have the chance to include more locations (for example, the diner seen above), along with otherwise improving the flaws of the first season.

Given this sequel news, Sam and Max is officially the first episodic series to actually work as intended. It didn’t get cancelled (Sin), and the chunks of gameplay tended to come out with a breathtakingly satisfying frequency (unlike the Half-Life 2 “episodes”).

In case you’ve missed out on the fuzzy duo’s recent adventures, pick up the full Season One DVD for the bargain price of 35 bucks. You won’t regret it…if you have a soul.

Hit the jump for the full press release, if you’re so inclined.

Sam & Max Season Two follows the highly successful and critically-acclaimed debut that ran from Fall 2006 through Spring 2007. Each episode will premiere exclusively for play on GameTap, followed by a downloadable release on Telltale’s website the next day.

“Season One was a great success, but it’s just a starting point for us,” says Telltale’s CEO Dan Connors. “The episodic model presents so many opportunities to innovate and engage the audience in brand new ways. Just wait until you see what Telltale and GameTap have in store with Season Two.”

“GameTap and Telltale successfully proved the idea that games can work in a TV show format,” said Ricardo Sanchez, vice president of content and creative director for GameTap. “The Sam & Max episodes continue to be among the top titles played at GameTap and we expect that Season Two will be an even bigger draw.”

Sam & Max Season Two will feature the same quick wit and bizarre scenarios Telltale’s team and Sam & Max creator Steve Purcell delivered the first time around—and more! “We’re sticking with the dramatic structure and accessible gameplay style that are working so well, focusing on telling crazier stories, and telling them better,” says Telltale’s design director Dave Grossman. “You’ll see some changes to the world; improvements that were born out of player feedback and our own desire to create the smoothest and most entertaining experience possible.”

Some of these changes are evident in the first Season Two render, released today, which is set in Stinky’s, the diner down the street from Sam & Max’s office that remained closed for the entire first season. Additional game assets, including glimpses of brand new characters and environments, will be revealed at San Diego Comic-Con starting tomorrow at the panel, “Episodic Games and Comics – Made for Each Other” (11:30-12:30 in room 1AB).

The landmark Sam & Max Season One is currently available at www.telltalegames.com and www.gametap.com as well as other download services, and will be coming to retail stores in August courtesy of The Adventure Company in North America and JoWooD in Europe. For more information about Sam & Max, including a four-part retrospective feature celebrating the duo’s 20th anniversary, visit www.telltalegames.com/samandmax.

About Sam & Max
Steve Purcell published “Monkeys Violating the Heavenly Temple” as his first Sam & Max comic in 1987. Sam & Max solved assorted crimes and mysteries as Freelance Police in their sturdy 1960 black and white DeSoto Adventurer from their home base in New York City. After a series of follow-up comic books, Purcell worked with a team at LucasArts to create the critically-acclaimed Sam & Max Hit the Road adventure game in 1993. The dog and rabbity-thing duo moved to television in an award-winning animated series in 1997. They are now appearing in an all-new webcomic series at www.telltalegames.com, which has been nominated for an Eisner award for Best Digital Comic. The first full season of new Sam & Max games in over a decade will come to retail stores worldwide in August, courtesy of The Adventure Company and JoWooD.

About Telltale, Inc.
Telltale is a new breed of interactive entertainment company pioneering high-caliber episodic game publishing and development. Founded in 2004 by industry veterans with decades of experience, the company has quickly become a leader in episodic gaming by delivering award-winning interactive experiences that emphasize engaging stories, strong characters, and rich worlds. Telltale has shipped 10 titles to date, using proprietary tools that streamline development of high-quality, cinematic experiences for multiple platforms and digital distribution. These releases include the monthly six-episode series Sam & Max: Season 1, episodes adapted from Jeff Smith’s epic Bone graphic novel series, and games based on television’s popular CSI program in partnership with Ubisoft. Telltale offers content development and custom publishing services for license-holders interested in interactive adaptations of their properties. Telltale’s games are available at the company’s website and through select partners such as Turner Broadcasting’s GameTap subscription service. To learn more about Telltale, please visit www.telltalegames.com.

Turner Broadcasting System, Inc. (TBS, Inc.), a Time Warner company, is a major producer of news and entertainment products around the world and the leading provider of programming for the basic cable industry.