It’s been a looooong journey, but we’re finally bearing down on the western release of PS4 mecha-themed anime adventure, Sakura Wars. Sega has released details of the reboot’s various release editions, alongside a new trailer looking at the relationships the player can form with the RPG’s doe-eyed cast of characters.

Like many JRPG releases, spending time and engaging in conversation with your battle buddies will forge deeper bonds with them, which can lead to friendships and possibly even romance. Using Sakura Wars’ “LIPS” dialogue system, players can get to know Sakura, Hatsuho, Anastasia and Co. a bit better, which will unlock abilities on the battlefield. You can see this mechanic in action in the trailer below.

Sakura Wars will launch in the west in several formats. These include a standard digital edition, featuring a download of the game, a PS4 theme, and a Neko Ears costume bundle. Players who pre-order the physical Launch Edition will receive a boxed copy of Sakura Wars complete with reversible sleeve, a sticker set, and an exclusive Theater Costume bundle, which includes alternate stage clothes for various cast members. 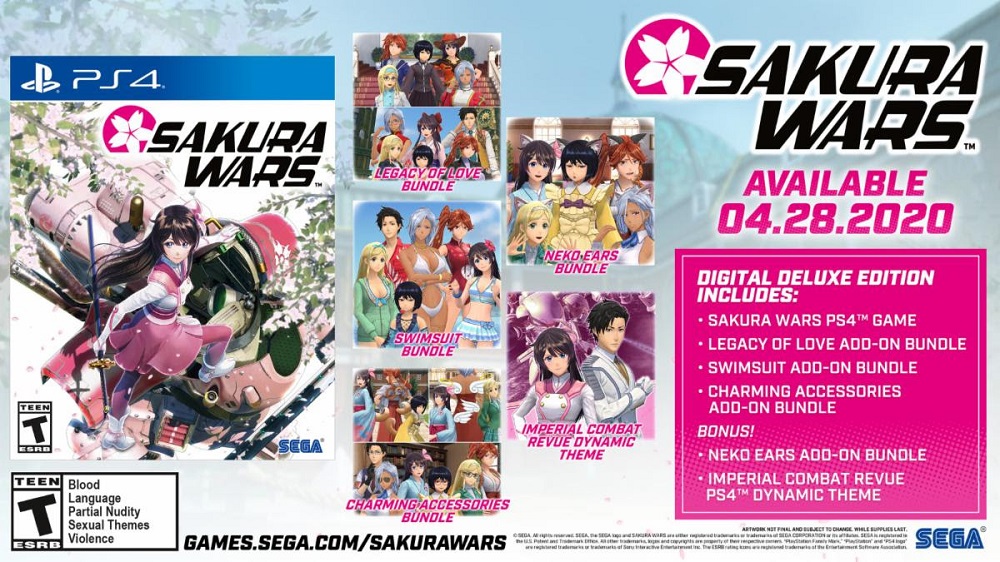 Finally, pre-ordering the Digital Deluxe Edition bags you a download of the game, the PS4 theme, the Neko Ears bundle, the Charming Accessories Add-On Bundle (featuring multiple costumes, swimsuits and accessories) and the Legacy of Love Add-On Bundle (which includes costumes and alternate soundtracks which pay tribute to previous Sakura Wars releases). Players who choose to purchase the physical Launch Edition will be able to upgrade in order to access the Digital Deluxe pre-order extras.