I’ve said it before and I’ll say it again: Videogames are way too serious. Don’t get me wrong. Serious games can be fun. What I’m mostly agitated by is the state of gaming where not a lot of crazy outrageous games are being produced. Remember Conker’s Bad Fur Day? Armed and Dangerous? They were stupid, but in the “this is so stupid that it’s fun” kind of way.

While there are at least a few games that fall under the “stupid fun” category (as I like to refer to it) coming out this year, the one that easily stands above the rest is Saints Row: The Third. We’ve seen the game a few times now, but THQ finally let us get some hands-on time to just do a bunch of stupid sh*t all around the city of Steelport.

The first thing that we checked out was the new vehicle handling mechanics. You remember in Grand Theft Auto IV how driving a vehicle for the very first time felt really weird? In Saints Row, it just feels perfect right off the bat. There’s no learning curve and you’re able to do sick turns and stuff like you’re a pro right from the start.

While driving, you can shoot your guns and throw out grenades. The GPS system has been overhauled and displays visual indicators right in the game world so you can focus on the world in front of you instead of looking back and forth to the mini-map. The GPS also automatically adjust its direction in-case you’ve missed a turn. 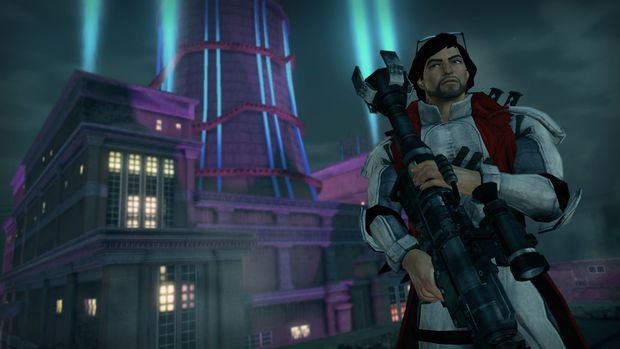 The 50 plus vehicles in the world can all be customized to your hearts content at the car shop, humorously named, “Rimjob.” You can strengthen your body and tires to make your ride more resilient, increase the vehicles speed, adjust vanity aspects such as the paint job and add stupid things like an underglow. Best of all, all the vehicles you create will be automatically saved at your garage so you don’t have to worry about losing your ride after it gets totaled.

On top of the regular cars, you’ll have special vehicles like tanks and jets. Then there are the insane vehicles like the Johnny Gat mobile that shoots out fire from the front of the ride and the Professor Genki’s Super Ballistic Manapult that sucks up and shoots people out of a cannon. Retardedly awesome? YUP!

The absurdity of course doesn’t just stop with the vehicles. The weapons themselves are just as outrageous. Expect your standard set of weapons like pistols, machine guns and the like, all of which are customizable. But why mess around with boring realistic guns when you can call in a goddamn airstrike on an unsuspecting group instead? Not personal enough? Well how about getting a first person perspective as you remotely guide a missile fired from a predator drone flying above the city? 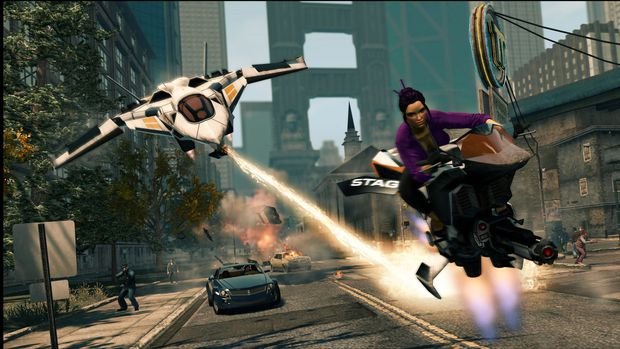 Other weapons will include boxing gloves that instantly blow up people, a giant floppy purple baseball bat and the Mollusk Launcher. The Mollusk Launcher is a weapon that shoots out Japanese talking octopuses that latch onto people and takes control of them so they will fight alongside you. You can also blow up the octopus while it’s latched onto objects. Did I mention how stupidly fun this game is yet?

Oh yeah, there’s also a whole nut shot system in place. Volition, a major videogame developer, spent God knows how many hours creating a fucking system just dedicated to a variety of different ways you can destroy someone’s crutch region. I love it.

One of the last things we did in our demo was create a monstrosity of a character. The main character is fully customizable, everything from his race, hair, nails, sex and voice. Saints Row: The Third takes the customizing feature up a notch by offering really stupid options. Basically, we ended up with an old overly fat guy that had completely gold skin, a skull face tattoo and the voice of a Brazilian woman. It was creepy as hell. 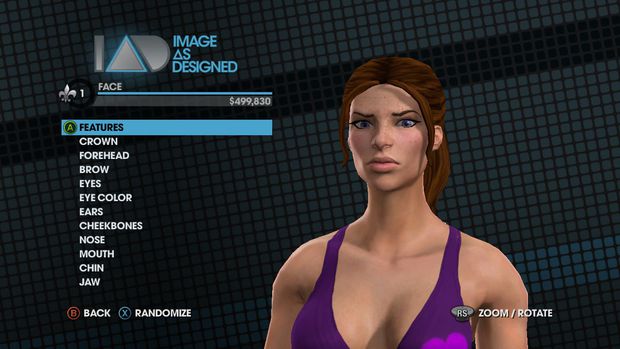 You can choose your clothing too, everything from normal outfits to full on furry suits. Or you can just run around naked. So imagine our golden creation running around pantsless as his giant dick is flopping around everywhere. Oh yeah, I forgot to mention: You can adjust your characters sex appeal, which translate to either giving yourself a really giant penis or humungous breasts. The naughty bits are censored, but with that crappy distorted pixel effect so you can kind of make things out still. And of course, physics apply so you’ll see your giant dick swinging around like a record (baby) or your breasts bouncing around like a kangaroo inside of a bounce house in outer space.

Before I was done with my preview time, I messed around with a side mission in Professor Genki’s Super Ethical Reality Climax Show. It’s basically Running Man meets a Japanese game show. You’re thrown into a room and given a specific gun to shoot a bunch of targets and people in furry suits. Your health doesn’t regenerate in these missions so you have to shoot signs that pop-up with health icons. Oh, and you can’t shoot the signs with pandas on it because it’s unethical. I don’t know.

You have a target goal and time limit to complete Professor Genki’s obstacle course. Succeed and get some money and your respect level increases. Respect now applies to your characters progression system, so the more respect you earn, the more stuff you can upgrade such as your health, skills, gang abilities and so forth. 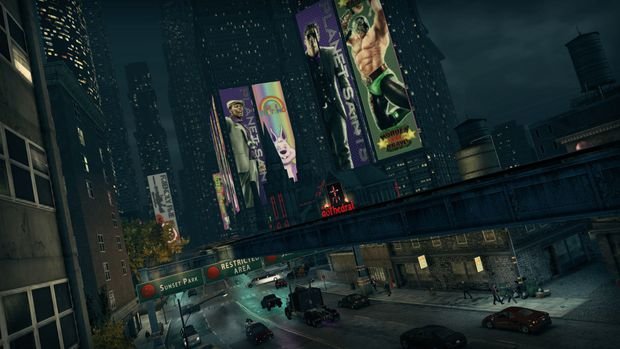 If you haven’t picked up on it by now, Saints Row: The Third offers you a lot of customizing features for just about everything. And all these lends to what I seriously consider one of the funnest games I’ve ever played. Every five minutes, something in Saints Row: The Third made all of us watching in the room laugh out loud. Volition wants you to have fun every possible second and that’s exactly what I experienced during my hour with the game.

I didn’t even play a single storyline mission, but if videos like these are any indication, then I’m sure it’ll be a blast.