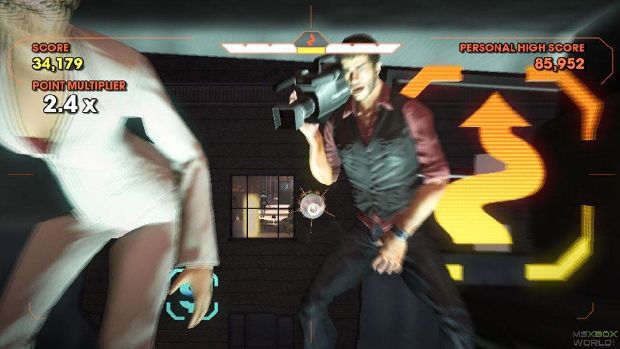 Hot on the heels of The Most Stupidly Awesome Collector’s Edition of 2011, THQ’s Saints Row franchise seems to want to keep itself in the spotlight.

Some scraps of information have circulated from a number of sources pointing to something called Saints Row: Money Shot. First, there was the apparent cancellation of an Xbox Live Arcade version of Saints Row in June. Then the Australian Classification Board revealed an MA15+ rating for a game under the Saints Row: Money Shot name.

On top of that, some screenshots appeared recently, along with an Xbox 360 achievement list. The list of achievements adds up to 200 points, suggesting this is an Xbox Live Arcade title. Not unlike the one THQ apparently cancelled in June. Without an official announcement though, we’re left to speculate on the nature of Saints Row: Money Shot. Is it an add-on for Saints Row The Third or a standalone game? Why do the screenshots make it look like a rail-shooter? Just what the hell is that guy doing with that video camera? Huh?