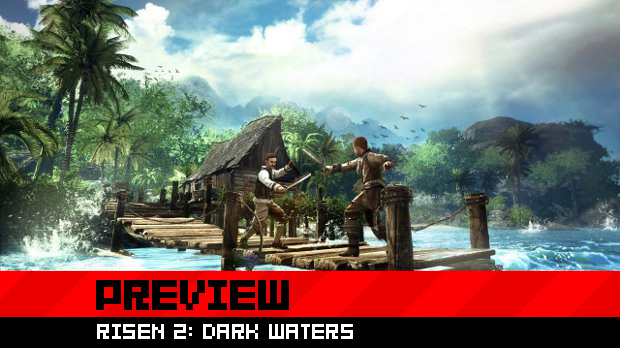 Ahoy matey! This here be a videogame about pirates, ARRR! OK, I promise I won’t any more pirate jokes, but it’s going to be difficult. Risen 2: Dark Waters brings the well-crafted role-playing of Risen into a Caribbean world filled with swashbucklers, voodoo, pistols, parrots, and silly monkeys.

At first it might seem odd to try making a traditional Western RPG into a pirate game, but once I played through the first quarter of Risen 2, it made me wonder why no one has tried this before. 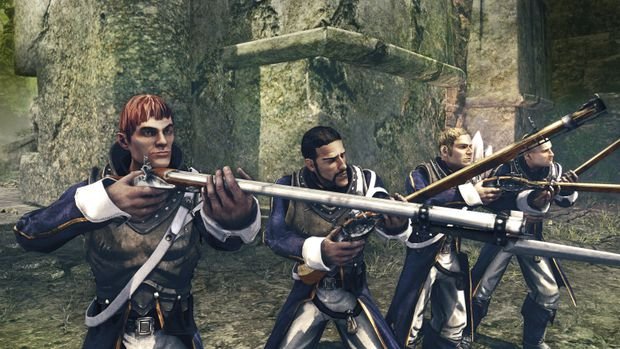 Risen 2: Dark Waters picks up pretty much right after the ending of the original Risen. The nameless hero flees the island of Faranga with the Inquisition and joins up with them because he doesn’t have anything better to do. Don’t worry, you won’t really be missing out on any major story by not playing the first game. It’s barely connected at all, and at first I didn’t even realize that I was playing as the same guy.

You start off as an Inquisition lieutenant in a small coastal town. There are a few easy quests for you to do that serve as a good tutorial for learning the basic mechanics of the game. It’s better than being tossed into a huge open world and not knowing where you are supposed to go, like in Risen or the rest of the Gothic series. Soon, you are sent off on a mission to find a secret weapon that an evil pirate has gotten his hands on. In order to find this weapon, you must infiltrate the pirate ranks. As a cover story, you’re given a dishonorable discharge and stripped of your rank and gear. You now have to earn your place among the pirates starting from scratch. It’s a fairly good premise for the start of an RPG.

The story and writing aren’t amazing, but they aren’t terrible, either. It’s competent enough to set a fun background for the gameplay and to motivate you to move forward. Your partner at the start of the game, Patty, is a stereotypical pirate lass with a red bandanna, tight pants, open shirt, a cutlass, and a ridiculous self awareness of being a strong woman. When she kills people, she constantly proclaims that “I might be a woman, but I can still kick your ass!”

Her entire existence is utterly over the top and ridiculous; the other characters aren’t much better. You’re surrounded by drunken pirates, soothsaying voodoo villagers, and pompous soldiers. While each character on their own might be cheesy, they somehow all come together to make an interesting world. It’s just campy enough to make it enjoyable. I think it’s actually the best way to make a pirate game — I would feel disappointed if I wasn’t called a scurvy dog by everyone that I met. 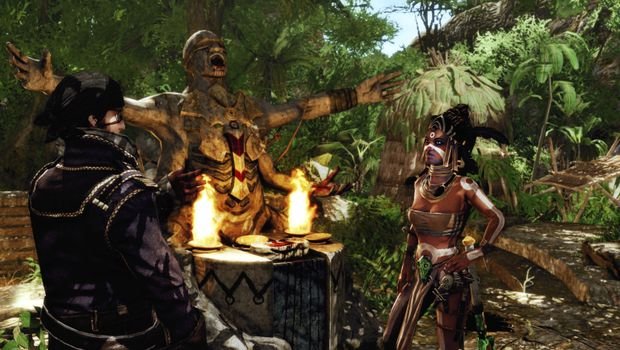 All of the normal role-playing game features are here, but they all have the names changed to make them sound more pirate-like. Health is blood, experience is honor, magic is voodoo, healing potions are rum, bows are muskets, and your party is called your crew. The way that pirate lore is used with traditional RPG mechanics is pulled off brilliantly.

Combat is similar to the original Assassin’s Creed. You block your enemies and use well-timed attacks to hit them when they are vulnerable. At the start of the game, you don’t have any skill or abilities so you get your ass kicked frequently, and you will feel almost useless against most enemies. It doesn’t take long to get a couple of tricks under your belt like tossing sand in your enemy’s face or kicking them. Once you start to unlock new skills, they will immediately make you feel a little bit more powerful. After playing for about four hours, I started feeling that I could hold my own in a fight. The curve may be slow, but it is rewarding once you get some cool abilities.

There are no levels in the traditional sense — only attributes, talents, and skills. You can unlock attribute levels as you earn honor, which is gained by completing quests and killing enemies. Your attribute level affects your talents. So if I raise my Cunning attribute up a level, that will increase the Dirty Tricks, Thievery, and Silver Tongue talents. Skills are specific things you can learn to do, like lock picking, pick pocketing, kicking enemies, or even learning how to use a parrot to distract your foes. Skills are learned from teachers, require a certain attribute level to access them, and you have to pay a lot of gold as well. 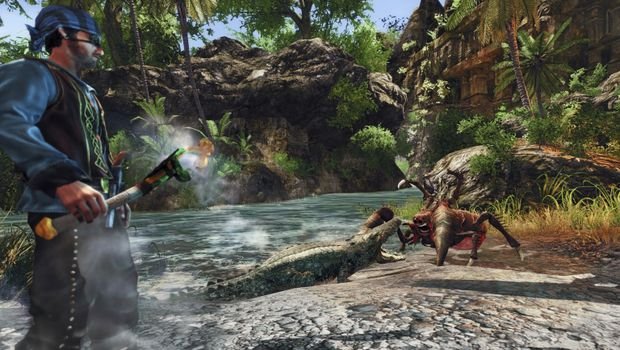 Risen 2 is a hard game. If you decide that you want to wander out of the safety of town and explore the jungle, you will probably die. Once you get some basic gear and skills, you can start to venture out slightly more, but should you encounter a cave and decide to go inside, expect to be torn apart by a giant spider or an angry ghoul. Dungeons and caves aren’t for the weak and unprepared. You need to be at the right level, you need good gear, and you need a lot of rum.

There aren’t any flashy arrows showing you your goal; you have to pay attention to what people are saying to find things. Thankfully, you can look at the whole quest dialog at any time from your journal just in case you missed an important detail. There are usually multiple ways to complete a quest, and it might not always be obvious what choices you have available.

Side quests can be completed in any order, and they usually have an effect on the main quest. Your main objective might be to find someone on an island, and by doing side quests, you can gain information, trust from the locals, or gear to help you complete you goal. Nothing that you do feels like a silly side quest. Instead, all of the characters are a part of a living world that responds to what you are doing. This has always been one of the strongest points of the Gothic series and it shines particularly well here. I did all of the side quests not so much for the honor and gold, but because they were fun and felt like a part of the story. 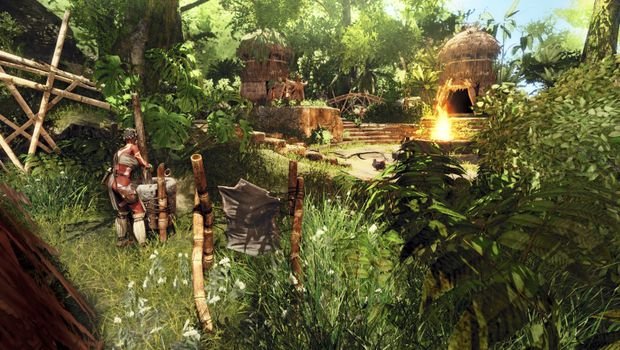 There are fun little mini-games scattered around to break up the regular gameplay. You can win some gold by playing a Fruit Ninja-style shooting gallery where you have to shoot stuff as it’s tossed across the screen while trying to avoid hitting bombs. There is also a drinking game where you have to click on bottles to drink them, but as you drink your cursor starts to respond weirdly and the screen moves around. They’re simple, but serve as fun ways to relax after spending an hour killing things in the jungle.

Crafting is alive and well with pirates. You can learn to make potions, swords, guns, or brew rum. This is accomplished by first gathering materials from around the world and buying recipes from vendors.

There are separate user interfaces depending on what you use to play. If you use a mouse and keyboard, you’ll have a quick bar at the bottom of the screen that you can use the number keys or mouse cursor to access. If you want to play with an Xbox 360 controller, the action bar is replaced by a radial menu that pauses the game when you bring it up. Both methods work well, but I preferred using a mouse and keyboard. 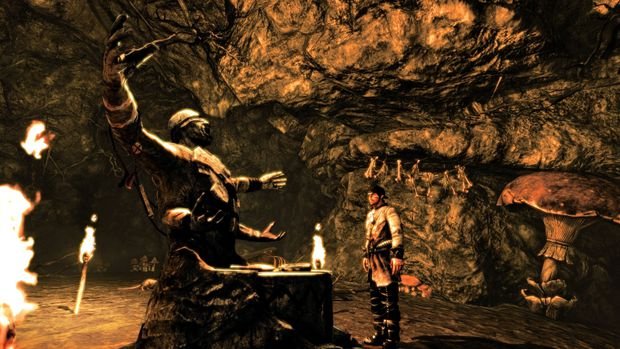 Risen 2: Dark Waters is a competent, enjoyable RPG. It might not wow you with all sorts of new features, witty writing, or a massive world to explore, but it covers all of the basics that we expect from a good RPG. It doesn’t try to be something bigger — it just simply tries to be a fun RPG, and it definitely is.

I had a good time playing it for about eight hours, and the full game should take around 40 hours to complete. I’m looking forward to the full game, and if you want another RPG to fill your time — or just want a pirate game — then you might want to check this one out too.