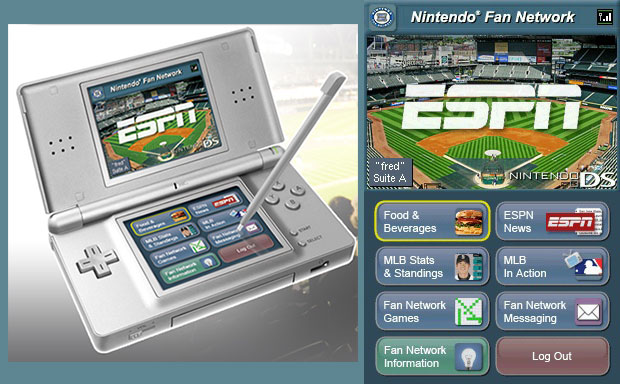 Gamers who own a DS (or now, a DSi) tend to take the handheld units with them everywhere; our own Colette Bennett says that her DS is “more or less glued to [her] person.” Since “everywhere” includes baseball games, the Nintendo Fan Network that was implemented in 2007 at Safeco Field (home of the Seattle Mariners) is a fantastic idea, if you ask me. The stadium features a Wi-Fi network that’s designed specifically for the DS; it offers a range of amenities, including access to stats and the ability to chat with other fans or even order concessions from your seat (only in America, folks).

Today, Nintendo announced a partnership with ESPN to upgrade the Nintendo Fan Network with “enhanced interactive features,” chief among them ESPN’s wide variety of sports content. The service remains entirely free and can be accessed without any kind of subscription by any Safeco Field attendee with a DS or DSi. The network also delivers closed captioning of PA announcements, live video feeds, real-time scoreboards, and updates on traffic and weather.

Speaking of the DSi, if you’re looking to try out the new handheld, Nintendo and the Mariners have a great deal for you. The first 150 requesters at each of the team’s home games — the first of which is tomorrow afternoon at 3:40 PM PDT against the Los Angeles Angels of Anaheim — will be able to rent a DSi, for free, for use during the game. The offer will run for the first three months of the season.

All in all, this sounds pretty bad-ass, and I hope Nintendo eventually expands the Fan Network to ballparks across America. For more information, hit up the Network’s Web site, or visit one of the two kiosks located inside Safeco Field (near sections 127 and 143).

REDMOND, Wash.–(BUSINESS WIRE)– During the baseball season, Nintendo will offer Seattle Mariners fans and visitors to Safeco Field new ways to enjoy America’s favorite pastime. To enliven the fan experience, Nintendo has joined forces with ESPN® to deliver enhanced interactive features to the Nintendo® Fan Network, including ESPN’s up-to-the-minute news and analysis, as well as closed-captioning of PA announcements. The entire experience is delivered to fans’ Nintendo DS™ systems through an exclusive Wi-Fi network. Since it debuted in 2007, the Nintendo Fan Network has provided stadium-goers the ability to access information, chat with other fans and even order concessions by using Nintendo DS systems.

In addition to new features from ESPN, the free Nintendo Fan Network service offers live video broadcast and interactive trivia and games, as well as real-time scores of other baseball games in progress. For added convenience, the Nintendo Fan Network also offers live weather and traffic information, and the unique ability to order food and beverages for delivery directly to the fan’s seat, all with a tap of the stylus on the Nintendo DS system.

Cammie Dunaway, Nintendo of America’s executive vice president of Sales & Marketing, says, “Whether you’re watching live video, ordering food from your seat or checking scores, the Nintendo Fan Network enhances the game-day experience for families and baseball enthusiasts alike.” Howard Lincoln, CEO of the Seattle Mariners, adds, “Our goal is to provide the best possible fan experience at Safeco Field. The Nintendo Fan Network gives users access to features and information that allow them to get the most out of their visit to the ballpark.”

“ESPN has a long heritage of embracing emerging media platforms to deliver unique experiences to fans,” said John Zehr, senior vice president, digital media production and product development. “Our collaboration with the Nintendo Fan Network is a direct extension of the ESPN mission to enliven the sports experience, no matter how or where fans are consuming sports.”

In honor of the new Nintendo DSi™ system, the third iteration of the best-selling Nintendo DS, the Nintendo Fan Network will also offer for the first 150 requesters at each home game a free Nintendo DSi rental for in-game use during the first three months of the season. Launched in North America on April 5, Nintendo DSi lets users customize and personalize their hand-held gaming experiences like never before. With the goal of transforming the way people access, experience, create and share content, the Nintendo DSi comes with two built-in cameras and new audio recording and playback functions.

For more information about how to experience Nintendo Fan Network, please go to www.NintendoFanNetwork.com or visit one of the kiosks located near sections 127 and 143 inside Safeco Field.