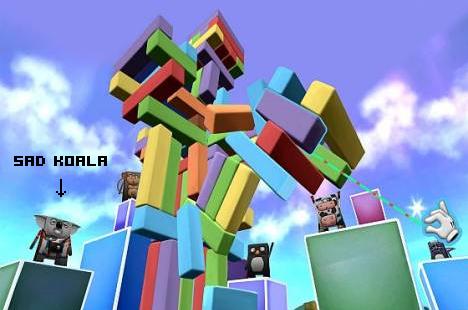 In the most depressing news of the day, according to the latest NPD data, Steven Spielberg’s amazing Wii exclusive Boom Blox only sold 60,000 copies in its first month of release. Putting that number in perspective, that is only 0.6% of all Wii owners.

While a lot of third parties are having trouble releasing hits on Nintendo’s popular console, this news comes as an extra shock since Boom Blox is easily one of the best games on the Wii. The puzzle mechanics are exceptional and the unique motion controls are used in a truly revolutionary, intuitive way. And, oh yeah, it was created by Steven freakin’ Spielberg.

Despite the low sales, EA remains confident the game will sell better and says it has already met the giant company’s expectations. And, honestly, 60,000 isn’t terrible … it’s just a bit disappointing. To ensure better sales, though, I am making a plea to the other 99.4% of Wii owners: If you like puppies, buy Boom Blox!

What do you think? If you own a Wii and haven’t bought this incredible game … why not?