People keep asking me about Ryse: Son of Rome. I think everyone has questions because we’ve heard so many conflicting things about the Xbox One launch title since its announcement. Is it a string of quick time events? How does it use Kinect? How’s the combat?

I spent hours with Ryse, playing from its beginning through five levels, putting it fully through its paces. Knowing that some of you are on the fence on this one, I’m glad I can now give a clearer picture this week as we’re just days away from the Xbox One launch. 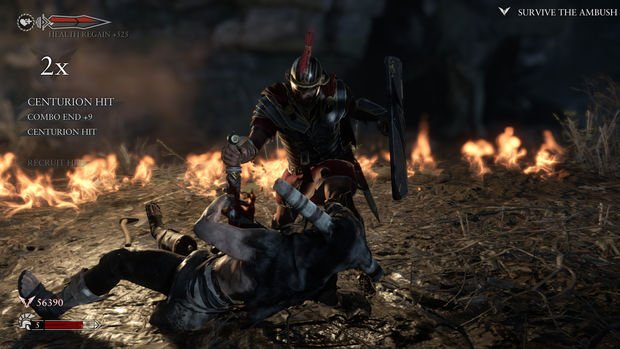 First, let’s clear the air. Ryse: Son of Rome is an action game. While early showings may have had gamers thinking that the gameplay centered around QTEs, the final version had me taking on hordes of invading warriors in an effort to help defend my city and my emperor.

Swinging a sword to engage any enemy feels like any hack-and-slash, though the hits feel slower and more deliberate. Slow bordering on clunky, really. Ryse kicks off with a combat tutorial that encourages blocking incoming attacks with a shield, and then returning with your own hits when the attacker has been properly deflected. It’s not the deepest combat system, but it’s effective and it feels decent.

Some of the spirit of QTEs live on in Ryse‘s finishing system, which ties cinematic kills with battle perks. Beat an enemy down enough and an icon will appear above its head, telling you to move in for a finisher. While you won’t see button prompts in these slow-motion sequences, you will see faint colored auras around the enemy. Press the corresponding controller face buttons to match the colors in time, and you’ll execute the finisher properly.

The perks you generate from this properly executed finisher are of your choosing. By pressing one of the four directions of the d-pad, you can set your perk to what you might need. You can put a charge into experience or attack-power boosters if you’d like. Slowing down time is possible with another perk. The one I used most saw a small hit-point refill with each successful finisher. 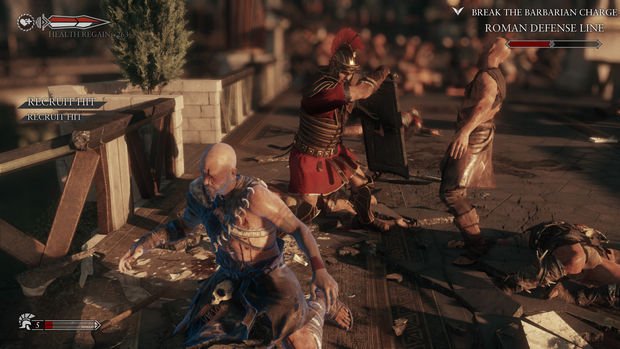 And that’s Ryse‘s gameplay in a nutshell. As I worked my way through the first three levels I learned that basic combos can be executed, and that precisely-timed blocks can stun enemies. Add in blocking breaks and secondary weapon use (spears), and you have combat that is quite a bit more interesting than an endless string of QTEs.

My problem with Ryse is that the battle system is not fully matched to the wave-based hack-and-slash gameplay. It’s a swing and a miss, if you will. As elements of the combat system are introduced, it’s fun to try them out and eventually implement them, but the fun only lasts for so long. 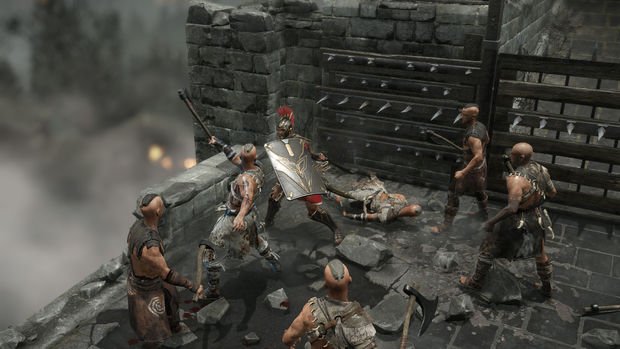 My main problem is that there is really one way to engage an enemy (run up and slash at them), and really only one way to finish them off. To be clear, the finishing sequence is not optional. You can choose not to press the prompted buttons, but if you engage the enemy at all when they have the finisher icon above their head, you’ll be thrown into slow-mo time.

What’s strange is that, even if you skip pressing buttons, the slow-motion hit sequence continues to play out. You won’t get your perk charge from the kill, but you’re still forced to watch it. Imagine watching these slow-mo kills 50 times in a row. 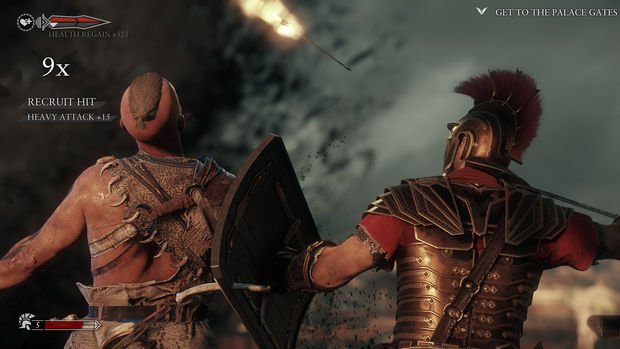 Worse, when you engage an enemy, your stance is locked in fighting mode, and you’re forced to face them until you kill them. Ryse has no problem throwing multiple attackers at you while you’re trying to finish one off, though. While the system does a good job of passing the fight from one enemy to the next, trying to do anything other than killing them all in sequence is frustrating. And forget trying to break away use an alternative tactic; there was more than one instance where I wanted to step away from an encounter to pick up spears or take cover, but the locked fighting stance would not let me.

It’s not that the battle system is poor. It’s just that there’s no flexibility to it, and that the lack of options and freedom begins to wear on you after awhile. In playing for almost three hours over five levels, I can tell you that I wanted to put the controller down and play something else.

Ryse is difficult. Between waves of multiple attackers and the lack of freedom in combat, I died more than 20 times in my hours of play. In one of the more difficult levels from later in the game, I started over from a checkpoint after setting the game on the easiest difficulty. I still died so many times that I felt that something was wrong with me.

I felt a bit better after seeing others around me dying frequently. I’ll admit that I’m not the most skilled gamer out there, but Ryse was grating on me in a bad way. I’ve been writing about games professionally for almost a decade now, but this is only the second time that I was so frustrated that I had to rage quit at an event. 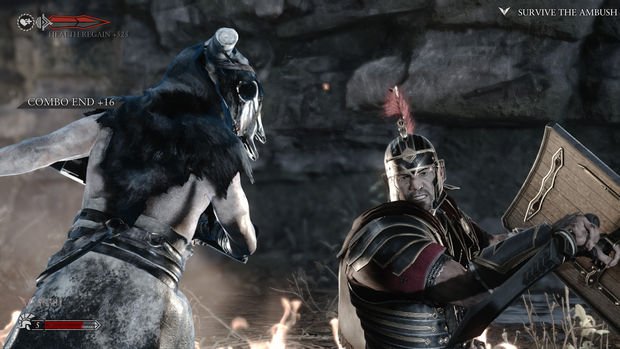 On a positive note, Ryse: Son of Rome is beautiful. Holy hell this game looks great. If you want a title in your library to show off what your shiny new Xbox One can do, Ryse it it. It has that big-budget polish shine, plenty of photorealistic set pieces, and outstanding voice work. No expense was spared on its presentation.

Ryse needs more time in the oven, I think. It’s probably a worthwhile play to enjoy the production quality Crytek pumped into it if nothing else (again, it’s gorgeous), and it would be a fun co-op romp with a buddy. But it’s also a mess, and your $60 might be better spent on another launch game.