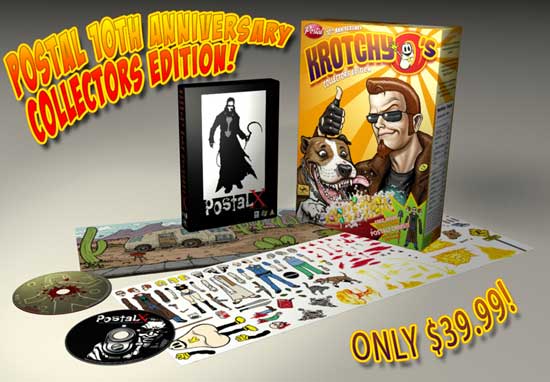 Believe it or not, but it’s been ten years since Running With Scissors first upset and shocked the gaming world with their over-the-top PC first-person shooter, POSTAL. To commemorate the occasion, they’ll be releasing the POSTAL: 10th Anniversary Collector’s Edition boxed set, that comes with a bunch of great goodies. And boobs.

The set ships in one of the cooler packages seen on the market — a Postal KrotchyO’s cereal box. The box is packed with stuff including: the original POSTAL and POSTAL Plus; POSTAL 2: Share the Pain; POSTAL 2: Apocalypse Weekend; four user mods; dozens of videos; a music CD; POSTAL comics; posters; a stickum play set; and ten sets of “Postal Babe” photos. See, I told you there were boobs.

The entire package runs at  more than respectable $39.99, and is available for a limited time only. You can order it online at the official POSTAL Web site, which also contains more than a few pictures of scantily clad women, as well as some stuff about the game. You know, if you’re into that kind of stuff.