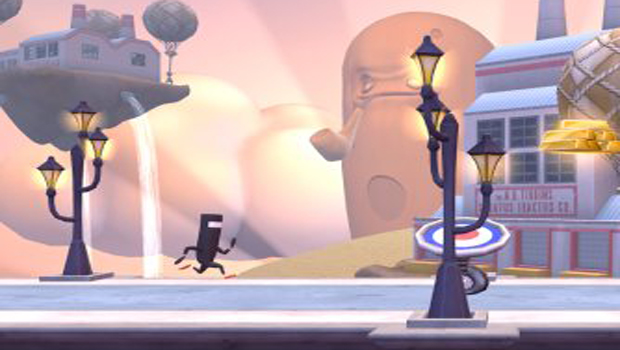 Like a lot of Bit.Trip fans, I was unsure what to think when I first laid eyes on the direct sequel to the 4th (and most popular) game in the series. On the surface, Runner 2 looks a lot different than Bit.Trip Runner, which might have some worried that the game will ditch the gameplay as well.

Thankfully, nothing could be farther from the truth. Bit.Trip Runner is to Super Mario Bros. as Runner 2 is to Super Mario World. Gaijin games took the original feel and gameplay hooks of the original Runner and extrapolated on them in every direction, while drenching whole package in a sloppy, delicious vat of raw personality. There are multiple paths to unlock, horizontal and vertical scrolling, strange new playable characters (like Uncle Dill), and cartoon surrealism injected into just about everything.

The original Bit.Trip series had tons of style and meaning, but it was also subtle and understated. If you’ve ever hung out with the guys at Gaijin Games, you’ll know that “subtle and understated” are probably not the best words to describe the experience. Playing Runner 2 definitely feels more like what it’s like to spend some quality time with the developers at Gaijin.

It doesn’t matter if you’re a Bit.Trip fan or Bit.Trip virgin. If you like fun, you’ve got to play Runner 2.