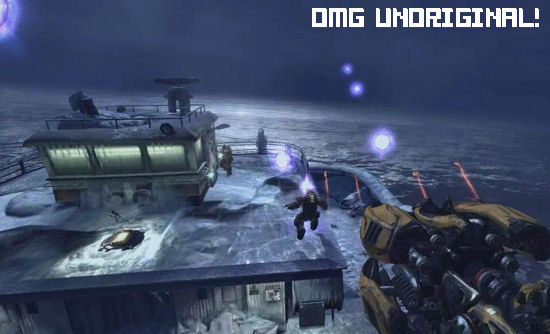 Like most writers in this industry, I hang around NeoGAF while pretending that I don’t. In doing so, I stumbled across a rather interesting thread detailing how Epic banned an Unreal Tournament III modder from its message board after he accused the company of stealing his creation, as seen (ridiculously briefly) in the Xbox 360 trailer:

I’m sure many of you already seen the new UT3 360 trailer, but what most of you don’t know is that one of the maps shown there ( DM-ArcticShipment ) is actually a user created map done by a member that goes by EpicJon on the Epic Forums.

The map, while not being exactly the same, is a blatant rip off, it’s a cargo boat, in the middle of the Artic ocean, with snow falling and with icebergs on the background. When EpicJon posted about his discontent in the Epic Forums he got banned and his thread deleted.

There is, of course, much discussion on the ethical and moral nature of Epic’s supposed actions, but let’s take a minute to look at this sensibly. Both maps are boats in the middle of the arctic, and they do share similarities — however, boats in oceans are not exactly original game settings, and the same can certainly be said for snow and ice. It’s not out of the question to consider that Epic was inspired by EpicJon’s map, but by the same token, accusing the company of blatantly ripping him off isn’t really founded, and simply not true (even if inspired, the maps are not carbon copies by a long shot).

Of course, where Epic screwed up is in silencing the accuser without the courtesy of explanation. Some would argue that Epic owes no such explanation, considering that the map similarities could just be coincidence, and the mod is a derivative of Epic’s original game anyway, but in doing things the way Epic apparently did them, it just looks like a dick move and ensures that gamers are going to assume the worst, which is exactly what’s happening.

We’ll try and get some official word from Epic on the matter and hopefully clear up this silly business, but I know one thing — you’ll never be Valve if you make your modders feel alienated, Epic.