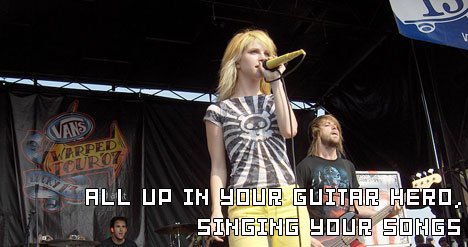 Are there no secrets? A recent survey on Guitar Hero: World Tour leaked to Kotaku has dropped a bomb of information on some celebrities and artists that may appear in the game when it hits shelves later this year.

According to the survey, songs by artists like Jimi Hendrix, The Doors, Foo Fighters, Smashing Pumpkins, Korn, System of a Down, Ozzy Osbourne, Interpol, Muse, and Tool will appear in the title. Additionally, the survey mentions that multiple songs by single artists along with dedicated venues are a possibility. But it doesn’t stop there — in addition to being able to create your own rockers, the game may also include playable characters like Sting, Ozzy Osbourne, Ted Nugent, Jimi Hendrix, Travis Baker, Paramore’s Hayley Williams, Zak Wylde, and the previously rumored Billy Corgan.

I’m exhausted just writing about this stuff; it’s clear that Activision is going balls-to-the-wall when it comes to picking up high-profile, recognizable artists and songs for World Tour. Activision’s obvious push to capitalize on the mainstream success of the Guitar Hero franchise doesn’t seem to be slowing down anytime soon. If these leaks turn out to be legit (and all signs really seem to point to “yes”), it’s hard to imagine World Tour not being a blockbuster this Fall.

The full text of the survey can be found after the jump. Also, don’t miss parts one and two of our first-look preview of Guitar Hero: World Tour.

In this new Guitar Hero game, join up with your band mates to form the ultimate super group and rock your way to the top. Shred on lead, rhythm, or bass guitar (three options on one guitar controller), rip on drums, or belt it out on the mic as you rock together on the greatest classic, modern, alternative, pop, and metal hits. 85 songs by artists including Jimi Hendrix, The Doors, Foo Fighters, Smashing Pumpkins, Korn, System of a Down, Ozzy Osbourne, Interpol, Muse, Tool (at least three songs and a dedicated venue), and dozens more come together to form the coolest set list ever. You can even play as your favorite rock star, choosing from characters like Sting, Ozzy Osbourne, Ted Nugent, Billy Corgan, Jimi Hendrix, Travis Barker, Hayley Williams, and Zak Wylde. If none of these are your style, then you can create your own character, including character construction, instrument creation, band logos and album covers. Then take it to a whole new level by jumping into a fully-integrated recording studio to lay down, upload, and share custom tracks online – for virtually unlimited rock. This game features the most authentic instrument peripherals on the market, including an all-new wireless guitar controller with the first-ever touch-sensitive neck slide, dedicated Star Power button, and ability to palm-mute. Also, the new killer wireless drums have ultra-quiet pressure-sensitive pads, raised cymbals, and are easy to set up and take down. Or, use the microphone to become the ultimate frontman. This new Guitar Hero game lets you rock together and rock for all.