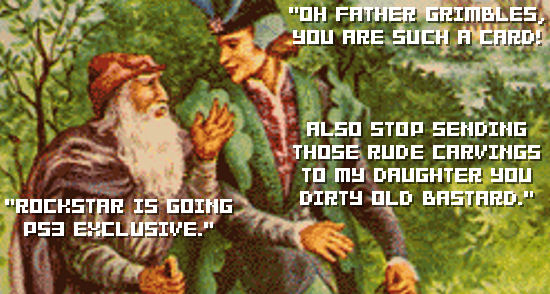 There’s not much meat on the bones of this story yet, but a murmur has surfaced hinting that Rockstar will soon be going PS3 exclusive once the multi-platform Grand Theft Auto IV is released. The rumor comes from Play Magazine, which claimed in its GTAIV preview:

“The game is both PS3 and 360, but Rockstar has suggested that all further game development is going to be PS3 exclusive.”

I’m not sure what to make of that. If it’s true, then that’s a huge potential success for Sony, but at the same time, it’s difficult to believe that Rockstar would choose to restrict its consumer base, especially with Bully: Scholarship Edition pegged for release on the Wii and 360. That, and any potential hostile takeovers could put paid to such an ideal.

It’s a bit of a stretch for the moment until more details arise, so this is definitely in the rumor camp for now. If by some bizarre turn of events it turns out to be true though, it could be a most … interesting development in the current-gen console war.

Filed under... #Exclusive on Destructoid#Rockstar#rumors