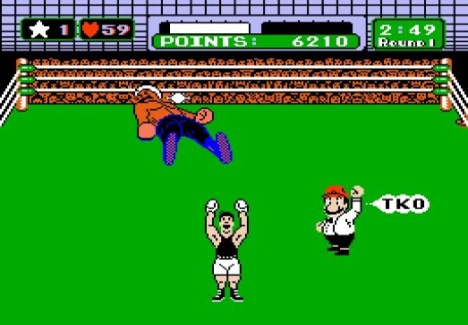 British magazine NGamer is reporting that a new rendition of the epic Punch-Out!! series could possibly be shown at E3 this year for the Wii. The rumored rehash is to incorporate Balance Board support, as well as a play style similar Wii Sports Boxing. Unlike Wii Sports Boxing, this title could possibly be fun. Not to mention it could carry the exciting risk of falling off a Balance Board in the middle of a match.

The information comes from a “secretive source” which could mean a bum on the street, a banana, or even Reggie. I would hazard a guess and say that this probably isn’t too far from true, as our own Tron Knotts utilized his Psycho Mantis powers predicting this title a few weeks ago. It is also important to note that Punch-Out!! was previously rekindled on the SNES. The stretch of bringing it back on an even more successful platform doesn’t seem too wide.

I attempted to reach Glass Joe for comment on the story, but his wife told me that his face was to swollen to talk at the moment, and to call again next week. I did get a chance to talk to King Hippo last night. When I asked about the possibility he would return this generation he said:

We will definitely tell you the second we glimpse this supposed title at E3.