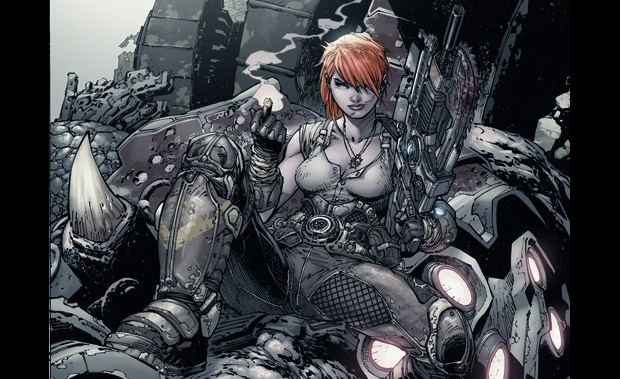 So you may have noticed the severe lack of women in the Gears of War universe. There’s Dom’s wife, that other woman who keeps yelling at you over the intercom and I think I saw one running for her life at one point. Outside of that female appearances in the Gears games are slim to none. Evidently mankind’s last stand can truly only be taken by men. Or can the ladies join in too?

Speaking on an episode of 1 vs. 100 Cliff Bleszinski himself said he had absolutely no comment on the subject of a female Gear in Gears of War 3, especially since there is no such thing as Gears of War 3 at the moment. Theoretically though, if said game was to exist, Bleszinski says that the female Gear from the cover of the Gears of War comic book pictured above “may or may not” be involved in the said theoretical videogame.This doesn’t really confirm if she is playable, but even if she isn’t it would be nice to have another person in the game without a neck as thick as my thigh.

(Note: If I’ve missed some obscure Gears lore that gives the reason for the lack of female soldiers I apologize. I’ve only played the games.)