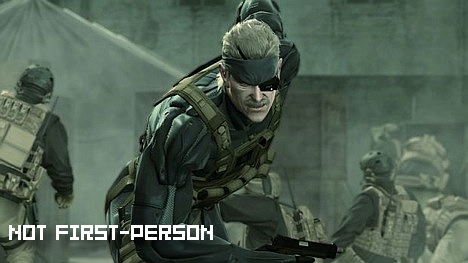 Hideo Kojima, mastermind behind Metal Gear Solid, could be moving away from third-person stealth games with terrible controls in favor of an FPS. Electronic Gaming Monthly’s rumormonger Quartermann has reported on stirrings that Kojima has been visiting studios to get a handle on the genre.

Two specific studios he allegedly visited are Infinity Ward and Guerilla Games, but chances are they won’t say anything about the presumably secret visitations. Kojima isn’t a stranger to the FPS genre entirely. A few months ago he called out Guerilla Games for their rush job on the motion controls in Killzone 2.

This story has about as much substantiation to it as the blueberry pie next to me has blueberries. Which is actually zero, because I don’t have a blueberry pie in my vicinity. I wish I did, but that’s how life is sometimes. We’ll do our best to confirm it, but we probably won’t know for sure until Kojima decides to pitch the title.

Also, it’s important to note that this story is considerably better than an X-Blades clothing update. Consider this the best story on a Saturday at 1:54 A.M. ever.