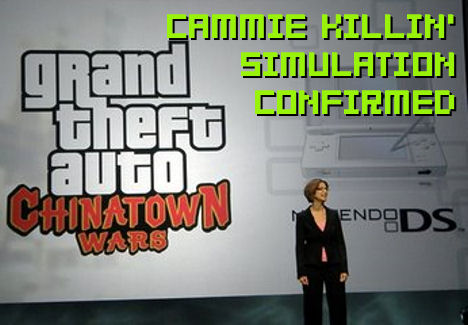 Since its announcement at E3, details on Grand Theft Auto: Chinatown Wars for the DS have been thin on the ground. However, if rumor is to be believed, some details on Rockstar’s portable controversy-waiting-to-happen may have surfaced. Taking the form of a consumer survey that asked rather specific questions about an “upcoming game,” some potential new information may have been unearthed.

If true, the questions posed in the survey shed some light on what Rockstar is currently mulling over for Chinatown — including the story of a young gang soldier caught up in an internal power struggle, gameplay lasting 20+ hours and stylus-based minigames.

There’s no telling if this is true, although I understand the source is pretty reliable. Either way, I wouldn’t advise too much stock to be held in the info at this present juncture. The survey questions certainly provide something to think about in any case, and you can read them after the jump.

16. Please grade each of the following game features on how interesting they’d be for a Nintendo DS game.

-OPEN WORLD: It takes place within an open, real world environment. You will have the freedom to navigate a massive map, explore a world with changing weather and traffic patterns, smart Police and pedestrian AI, and choose different missions to play at any given point in time.

-MATURE STORYLINE: This is the story of an outsider navigating the criminal underworld of a major city. You play as a young gang soldier involved in the internal power struggle for control of his gang.

-AD HOC MULTIPLAYER: With wi-fi connectivity, players can play each other head to head in four different game modes, including a race (seven different race maps, can race with all the game vehicles), and play co-op modes.

-LENGTH OF GAMEPLAY: 70+ missions, 20+ hours of straight gameplay—with significant replayability on top of those 20+ hours.

-STYLUS BASED MINI GAMES: Missions include a wide variety of contextual mini-games, such as assembling a sniper rifle to complete an assassination mission, and smashing locks and hotwiring cars to steal them.

-REPLAYABLE MISSIONS: A feature that allows you to jump to any completed mission from a convenient menu and play them again.