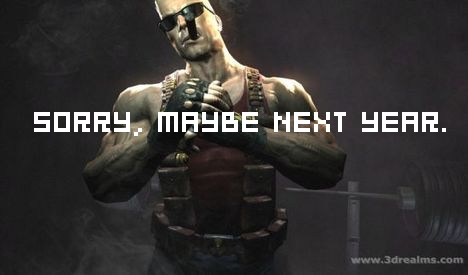 An unsubstantiated little birdie recently told VE3D that everyone’s favorite, but perhaps slightly delayed, tough guy will not be appearing at E3 this year. Of course, this is probably not shocking news, considering that Duke Nukem Forever has not been at an E3 event since 2001, when 3D Realms dramatically revealed a trailer for the title.

This is the exact opposite of what happened in 2005, where rampant rumors dictated that Nukem could pop in with 3D Realms’ bedfellow, Prey. It is interesting to note that the press on Duke Nukem Forever has increased by at least one billion percent over the last few weeks. First, there was the gameplay footage revealed on the premiere of The Jace Hall Show. Then a few days ago, a job ad was posted over at 3D Realms with a tiny little picture of the Duke.

I contacted 3D Realms president George Broussard for comment, so maybe if we all sit in a circle together and pray, a response will be gifted upon us. I’m the kind of guy who enjoys first-person shooters that spew outdated clichés and allow me to flush toilets on command. I especially enjoy jetpacks, pig cops, motorcycles, and chicks.

But how about you guys? Do these delays and stories even affect you anymore as the clock continues to wind on Duke Nukem Forever?