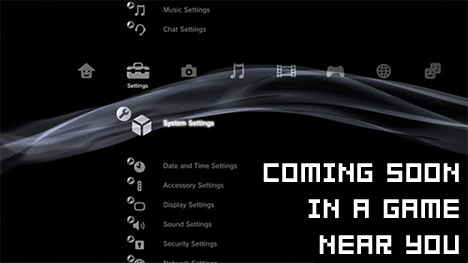 The Internet was ablaze with speculation yesterday that the PlayStation Network’s downtime for scheduled maintenance (from 11 AM to 5 PM EDT) meant that PS3 system software v2.40 was not too far in the offing. Now, we have some seemingly concrete details on the update’s release window, as well as the new features it will provide.

A little bird told CVG that we should expect to see the launch of v2.40 in about three weeks. Hm…three weeks…hey, isn’t E3 in three weeks? Indeed it is! Coincidence? I think not. It seems like the perfect opportunity for Sony to show off the update’s feature set and then debut it on the PlayStation Network.

As for what “in-game XMB” actually entails, hit the jump for the full list of features that CVG’s anonymous tipster listed. It includes the requisite messaging functions (view, send, receive), as well as access to commonly-used XMB features like the download manager, friends list, and “system BGM” (background music). Sound-wise, you’ll be able to do things like playing, stopping, switching tracks, enabling repeat or shuffle, and changing volume (five levels).

The much-desired ability to play your own music from the XMB’s Music tab in-game will be there, but there’s no word yet on whether this will only be compatible with future titles. One of the bullets in the list simply says “Game category” — perhaps we’ll be able to launch different games directly from the in-game XMB menu without having to quit out of the current game.

Sony hasn’t confirmed (or, for what it’s worth, denied) any of this — hence, we’ve slapped it with the trusty Rumortoid tag for now. But if CVG is right, we’ll soon know how much of this is fact, and how much is fiction.