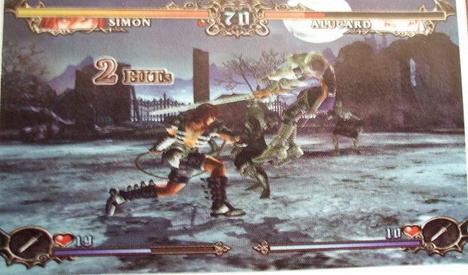 The latest Nintendo Power magazine allegedly has quite the tasty image for mass consumption. The picture above is a photo of a photo of the newest Castlevania game for the Wii, taken from the latest issue of the magazine. Inspection speaks volumes, as it appears that the series has taken the form of a fighting game, instead of the usual platformer.

JeuxFrance adds that the article stipulates that players will be able to control several characters from the legendary series, including Dracula, Simon, Alucard, Shanoa, and Maria Renard.  Also, the game is said to boast destructible environments as well as ringside interference in the manner of monsters and other creepy, crawly things.

I’m not one for fighting games typically, but I’ll gladly assume the role of Dracula and start biting on dudes’ necks.  The turnaround for the series is certainly welcome, but I wonder how the Wii motion controls will figure into the equation? Also, I wonder if this is the best possible route the series can go?