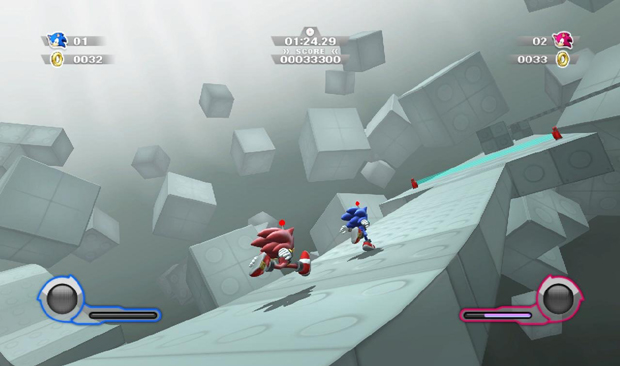 I’m jealous of Jim Sterling for many reasons. He’s funnier, better looking, and more British than I am (at least, most of the time.) He also is usually first to claim all of the Sonic Colors news. Luckily for me, I managed to snag this story before he saw it. Eat it my dust, Sterling.

I’m pretty psyched for Sonic Colors. Adding stuff that the Sonic series has long needed (like power-ups) while sticking to what Sonic does best (2D speed-scapes) is a smart move on Sega’s part. It would be even smarter to throw some local co-op into the mix. If Sega is hoping to tap into the +14 million Wii owners who bought New Super Mario Bros. Wii, that’s the way to do it.

We haven’t go anything but these screens (spotted on Amazon.com) to go on, but that sure looks like some Tails-free Sonic co-op to me. What do you think? Does this rumor sway you either way on Sonic Colors?