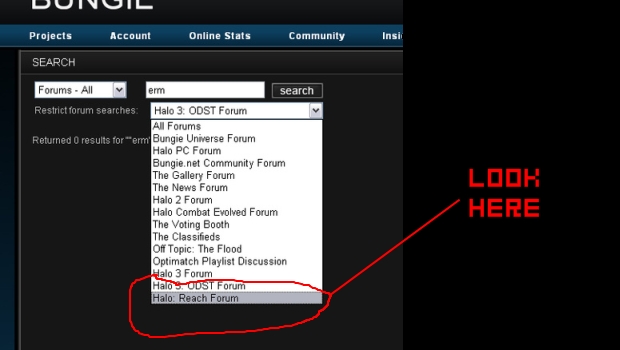 Halo: ODST isn’t even out the door and most likely won’t be for a few solid months, but you can’t keep a giant, billion dollar making franchise down. Since we all need something new to look forward to (or complain about, depending on your feelings towards the extension of the Halo series without Bungie) a new hint is available as to what is coming next. Members of the Halo forum sent the above screen grab over to Kotaku and as you can see Halo: Reach was at some point listed as a game to discuss. Back up the image is a cache that was found showing that the forum did in fact exist at some point.

Now, on with the wild speculation! If you’re a true Halo nerd, or just like reading sci-fi you know that in 2001 a canonical Halo book titled Halo: The Fall of Reach came out. It was a prequel to the first game and narrated the story of Master Chief and the SPARTAN II super soldier, of which Master Chief was one. The book had been hinted at as also being inspiration for one version of the plethora of versions of the script for the defunct Halo movie.

With this info in mind, and knowing that Microsoft is going to whore out Halo forever, here’s the dream scenario: Halo: Reach is the new Peter Jackson directed movie, with a tie-in game created by Bungie who secretly haven’t left the series, and just wanted to suprise us all. Also, pigs flying have been sighted over Norway.