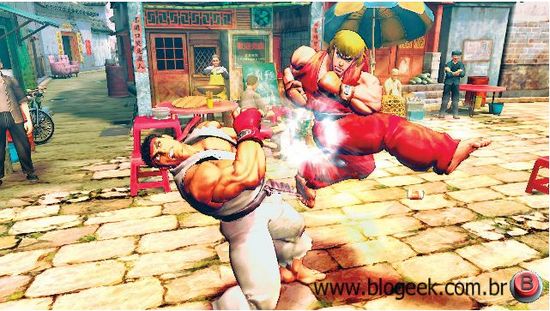 Brazilian gaming blog Blogeek has apparently gotten big news on the upcoming Street Fighter IV game and they are more than happy to share it with the Internets. Check out the translated info below:

The graphics aren’t the way they are in the teaser that everyone watched. The game’s still pretty, but it has nothing of that ink-splashing or anything. Art direction is interesting. Unlike all the other 3D fighters, SFIV is not meant to be photo realistic.

The game takes place after Super Street Fighter II Turbo and before SFIII. The good news is that the character roster will be made of many old-school brawlers and some entirely new ones. There are two new girls on the list. We will probably not see any SFIII characters.

The stage you saw at 1Up, if you didn’t figure out, is Chun-Li’s Stage from SF2.

The excellent Parry system form SFIII is gone. The new system seems to be called Saving or Revenge (we’re not sure about the name). We don’t know exactly how it works, but it’s built around cancels. And we do know we’ll have another gauge to activate the Saving/Revenge stuff, besides the usual Super Gauge.

Supers are there (although they didn’t decide yet if it will be like in SSF2T or SFIII), and now they’ve put another moves called Ultras. These makes your character throws a auto combo with tons of moves. It’s like a custom combo … except by the custom part.

Shen Long may appear in the game. We are NOT kidding.

The consoles are not decided yet, really. But, assuming that SFIV will have online play, we can obviously think of Xbox 360 and PS3 (duh). It’s very likely that we’ll see an arcade version without online mode too, and our sources told us that Capcom could put some test machines in Japan arcades in Q2 next year.

Of course, until we hear something from Capcom or pick up the next issue of EGM, we can’t be too sure about this info. So why run with this then? Because Blogeek also provided us with two new screenshots from the game. Looks like a little old blog site got the exclusive before a major publication … ouch. Of course, there’s always that one percent chance that Blogeek has the worlds best Photoshop artist on their team …

In any case, what do you all think about this latest info?

[Update: All this is true! Read the new post with updated info on this situation.]