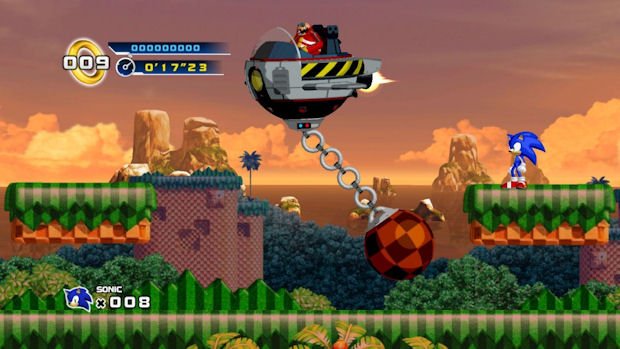 According to a number of reports, what you are looking at are some screenshots of Sonic 4 leaked from PartnerNET and yes, that IS Dr. Robotnik in a very old school boss battle you’re seeing. The new images, which we are waiting for Sega to verify, show off scenes from the leaked game footage we saw a while back. I don’t care what anybody else thinks, this stuff looks damn hot.

The Sonic fanbase, well known for their Internet sleuthing, have certainly found these hard to prove fake, so but until we get verification, we can only run this as a rumor. In the meantime, all I can say is that the shots look f*cking great! Hopefully we’ll get more original boss battles than this first one, but what better way to warm up to some retro-flavored Sonic with one of the most classic bosses of all time?