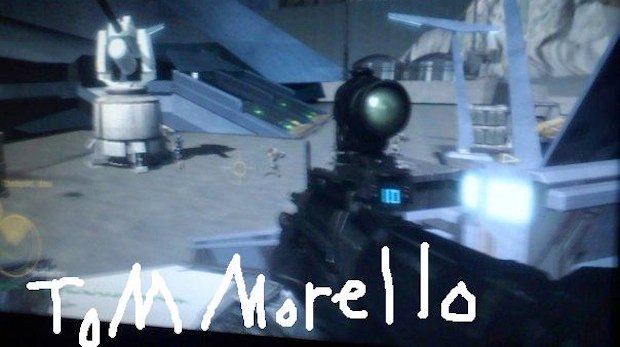 The first Halo: Reach images might have been leaked this afternoon via the MLG message board. User “Tom Morello,” recently created a thread showing a blurry, perhaps camera-phone-snatched photograph of the anticipated Halo follow-up’s Battle Rifle. He updated the thread again with more photographs of weapons, each of the same quality and with his username branded over as a watermark.

Some of the weapons shown are familiar (needler plasma pistol, rocket launcher) while others are not so much — especially this super Needler thing. Of note is the HUD, which Morello says lists teammate names as well as shows what “perks” players are carrying. In another post, Morello said he was carrying three at the time of one of the photos: sprinting, cloaking, and “halogram.”

When another user asked Morello where he snapped the images, he replied “at Microsoft HQ, btw, in a office.” Morello explained the motivation behind grabbing the initial image as wanting to show the MLG community the Battle Rifle, which didn’t appear in the latest Halo title, ODST.

The first image is in the header. The rest are available in the MLG thread or collected nicely in this NeoGAF thread.

We stress that we haven’t the slightest if these images or light details are the real stuff or not. Take this with a grain of salt. We’ve contacted Bungie for confirmation of these images and details.