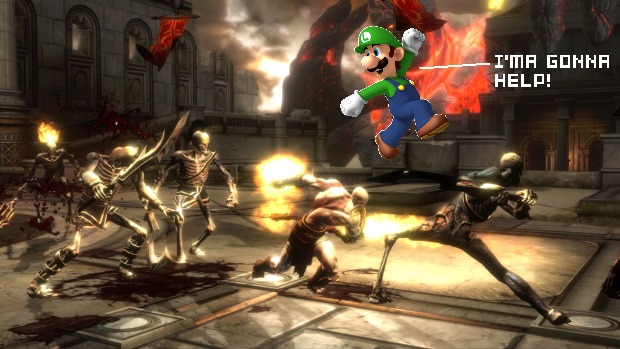 Technically this rumor has been around for quite some time, but there’s some new evidence that God of War III is going to have online co-op in it. Nick McCandless, from The Gamer Access, played the GoW III demo and loved it so much he desperately needed more info on the game. He thus logged onto Sony’s Retail Loyalty Site, where those in retail can learn about Sony products by taking a quiz. There he found a very interesting question: “Will God of War III have online cooperative modes?” The answer was yes.

Before we all get really excited or really disappointed (depending on what you think of GoW co-op) it should be noted that Nick “has quotes from developers just laying around” Chester was told by design director Todd Papy in February that multiplayer is “definitely something we’re looking into. But as far as any multiplayer experience, this is a solo campaign. Kratos has never really had a buddy for the trip so … but we are looking at downloadable content, and also Home support.”

Were they lying to us? Why would they do that? We even gave them a friendship bracelet after the last time they told us things that weren’t true. Seems strange that Sony would be educating retailers with false information, though. If this turns out to be true, know this: Sony has broken Mr. Destructoid’s heart for the last time. He won’t suffer their lies anymore, it hurts too much.

Filed under... #God of War#rumors