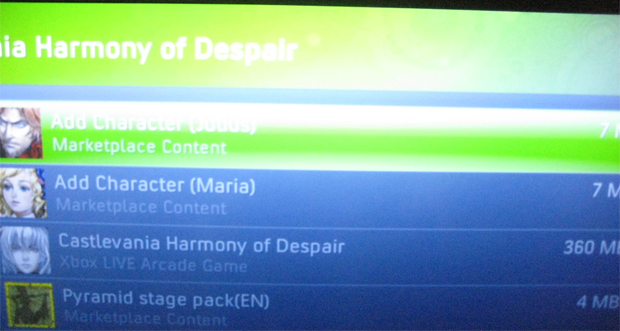 A GameFAQs user has uploaded what they claim are images depicting unannounced download content for Castlevania: Harmony of Despair. The collection of eleven, blurry photographs of a television shows Maria Renard and Julius Belmont as additional characters as well as a seventh chapter set in an Egyptian pyramid.

They certainly look real enough. And Maria is probably the most likely candidate of any character in the series to pop up next. Julius would be delightful as well, though I’ll admit to wanting to see Grant DaNasty in the game more than anything else.

Seems like a lot of effort to fake with likely little reward considering how the game has been reviewing. For the record, I love Castlevania HD but I’m a huge Castlevania nerd. I do think that in order to get to what will be the enjoyable bits for most (i.e. killing Dracula with a bunch of friends otherwise known as “the most thrilling thing I’ve done in a game so far this year”) there’s a huge hurdle of monotonous gameplay to get through.

Here’s to hoping the DLC, whatever it might be, will be cheap.