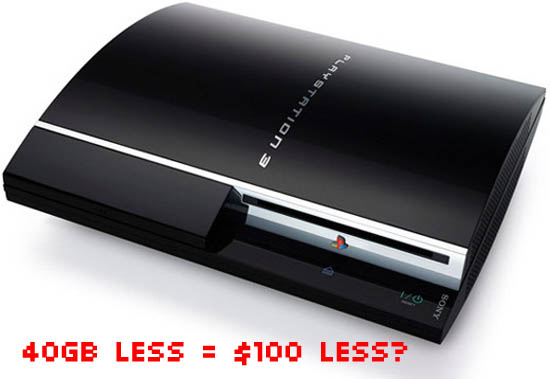 We don’t just run with rumors every day, but Ars Technica’s insider mole has scored with several recent tips, including the Xbox 360 HDMI inclusion bit, so we’ll trust that this new one has some weight behind it as well.

The very same mole now tells Ars Technica about some new Sony holiday pricing. While most of the changes (80GB price reduction, a cheaper PS2) are in line with what we’ve been keeping our eyes on, their list does include a surprise: a 40GB PlayStation 3 priced at $399.99.

If this information is correct, Sony could be set to make a huge splash this holiday. It’s a bit difficult to wrap our heads around a third PS3 SKU, but I don’t think anyone would disagree that this model would definitely be worth making and selling.

Keep in mind that there might be more “cuts” to this budget PS3. We’ve heard other rumblings about the omission of HDMI and Wi-Fi, which would take this $400 purchase down from a “given” to a “hmm” for potential buyers. Of course, none of this is confirmed yet.

Ars Technica says to keep an ear open for more news at this month’s Tokyo Game Show. Hopefully then we’ll be able to bump this rumor up to fact.

[Via Ars Technica — thanks, Justin]