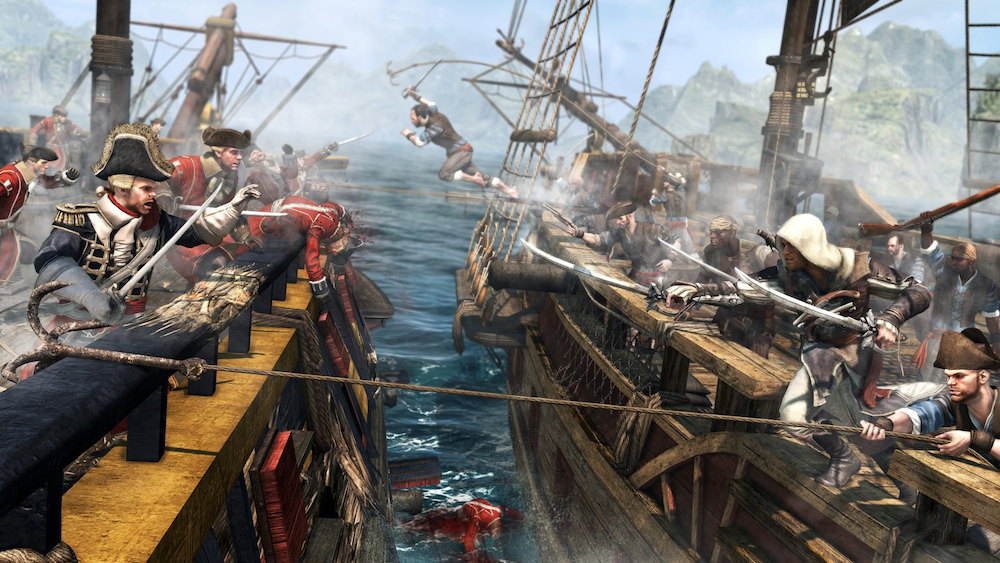 Pillage all the things!

Assassin’s Creed IV is going to feature a huge open world that you’ll be able to explore seamlessly. There are only a few large locations that you’ll have to load into, but everything else in the West-Indies Sea, spanning the biggest map in an Assassin’s Creed game yet, will be explorable without having to load a thing.

The entirety of the demo I saw consisted of a bunch of side stuff you can do in the game, so don’t worry about any story spoilers here. The world of Assassin’s Creed IV is full of life and is going to provide a lot of stuff to distract players while sailing the high seas.

In the demo, new Assassin Edward Kenway takes on an Assassin Contract side mission to hunt down a pair of brothers somewhere in a fishing village located in the Grand Cayman Islands. There’s a ton of life in this little village, and using the Assassin Eye to highlight your targets will help you achieve your objective faster. Edward takes out one of his targets, but the other brother sees this happening and flees to the harbor. Players can take out the other brother at any point, but for the sake of the demo the target was allowed to board his ship and head out to sea. From here, the player runs to his own ship and gives chase. This all happens seamlessly, with no loading while transiting from land to sea.

Players have total control over the ship, from steering to using the various cannons. You can straight-up sink the ship you’re chasing, but I’d recommend boarding ships every chance you get. First you’ll want to pull up your telescope to view target ships, as you’ll be given info on what they’re carrying when looking at one. From here you’ll want to whittle down a ship’s health to 10% before it can be boarded, then get up close so your crew can latch on via boarding hooks.

Now boarded, you and your crew will kill anyone that’s still alive after your cannon bombardment. You can jump over with your crew or climb up your ship’s mast in order to strike from above. Once you’ve assassinated your target, the ship becomes yours and you’ll be given resources and even new crew members. Plus, you can nominate one of your own men to be the captain of the newly captured ship, or you can salvage it instead and use the parts to repair your own ship. If you capture the ship, you’ll send it off to your fleet and it will become part of the meta-game experience that will be available in the Assassin’s Creed IV companion app for mobile devices. 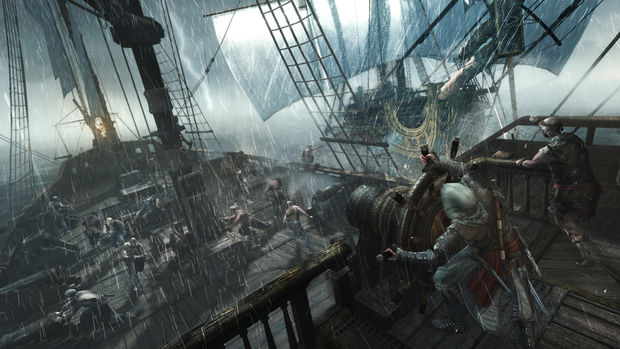 Later, Kenway and crew went to one of the many naval fort locations scattered around the map. These forts are fortified with cannons, and you’ll first have to take out all cannon placements, which is no easy task. After the path as been cleared, you’ll then dock your ship so you and your men can invade the fort, and your ultimate goal is to kill the fort’s commander. Afterward the naval fort becomes yours, and this will open up additional side missions as well as provide you with some serious tactical advantages, the prime benefit being that you can lead enemy ships towards one of your naval forts in order to get backup firepower from them. That said, you’re in serious trouble if you find yourself engaging a fort and an enemy ship just happens on by in the middle of it.

While a big open world is great, what’s the point if there’s nothing worth doing? Thankfully, Ubisoft has added a bunch of activities for players that you’ll want to do, as they’re going to be key to upgrading your ship, the Jackdaw. Think of the Jackdaw as a second character, one that you’ll want to take care of just as much as Edward himself. For instance, you’ll start off with only six cannons, but you can max your ship out with 56 if you spend the necessary time and resource.s. Your ship’s crew is just as important, from managing your ship to even offering up missions of their own. Plus, you can tell them to sing a variety of pirate songs. It’s like your own personal radio! Upgrading Edward himself is going to be more in line with Far Cry 3’s system as the crafting system is tied to hunting wild animals.

At one point in the demo, Edward approaches a deserted island to find the body of a marooned sailor. Search his corpse and you’ll find a treasure map! From here you can go to the location on the map, which as it turns out is full of enemy soldiers. It’s here where we get to see a lot of the improvements to the stealth mechanic, such as how Edward is smarter about pulling in corpses into hiding spots. 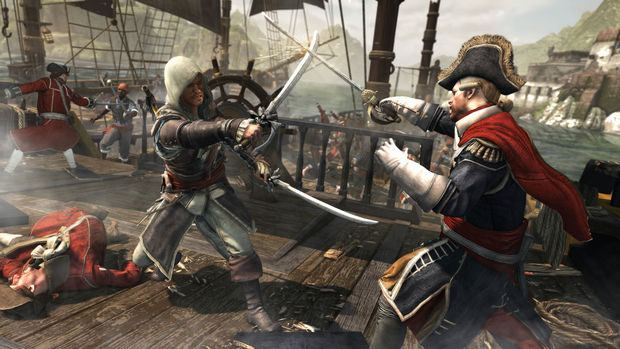 You’ll also have a ton more non-lethal weaponry, as they’ve taken out lethal poisons which in the past made Assassin’s games feel a little too easy. You have access to a blow dart among your many guns and swords, and it can shoot out sleeping darts or a dart that will cause targets to go in a blind rage and attack fellow soldiers. Additionally, they’ve gotten rid of the missions that will cause an insta-fail for just being spotted. You can still complete these missions after getting spotted, the game will just make it harder to complete by spawning in tougher enemies like snipers.

Once near the location of the treasure, Edward spots a few soldiers about to execute some prisoners. Save them in time and these prisoners will join your ship’s crew. With the soldiers saved Edward will dig for the treasure, and inside the chest is some blueprints containing significant upgrades to the Jackdaw. What, were you expecting gold or something? As lead writer Darvy McDevitt told us, “buried treasure, historically, was not a very common thing among pirates. That wasn’t very realistic back then. Pirates had no incentive whatsoever to bury their treasure. Only Captain Kidd tried that once, and that failed — they found it within a year.”

The ocean is brimming with life as well. Edward can go diving in certain locations, you can harpoon for whales, and storms can impact you at any moment. These storms can be dangerous, with water spouts or tornados forming right when you’re in the middle of a battle. That said, storms can also put the huge assortment of patrolling enemy ships at a disadvantage too. Plus, the Spanish and English empires will fight one another while out in the ocean. It was really cool seeing both empires go at it from a distance, hearing their distant cannon blasts fill the air. You can go participate in these fights, or just wait for one side to destroy the other before coming in and cleaning out the rest. 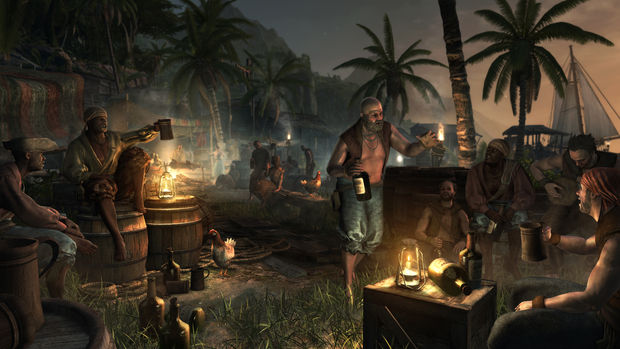 All this was shown off on a PC on par with the specifications of a next-gen console. “One of the things that next-gen allows us to do is push the art quality of course,” Darvy told us. “But we want to push the art quality that adds to the actual gameplay experience. One of the things that we added was this excessive smoke and fire [effect]. So when you’re in a battle with another boat, or when you’re rapidly firing your cannons, you see a lot of this volumetric fog and smoke fill the screen and really pits you into the fog of war. We really like the chaos that comes from this.”

I’m pretty excited for this latest entry to the Assassin’s Creed franchise. The new setting and open world offerings make this feel a whole lot different than anything we’ve seen before in the series. I’m really looking forward to just sailing through the open ocean, and starting up fights with anyone that gets in my way as I try to rule the ocean.