Today, Riot’s partner publishing platform Forge showcased some of its upcoming lineup of games. And alongside one previously announced title, Riot Forge surprise-dropped Ruined King: A League of Legends Story, while giving a glimpse ahead at what’s to come for Runeterra.

It’s available now for PlayStation 4, Xbox One, Nintendo Switch, and PC via Steam, GOG, and the Epic Games Store. PS4 and Xbox One versions are forward-compatible with next-gen systems. Owners of those versions get a free upgrade to the next-gen version, within console family, when those launch at a later date. Ruined King will retail for $29.99, with a digital Deluxe Edition offering some extra goodies for $39.99. 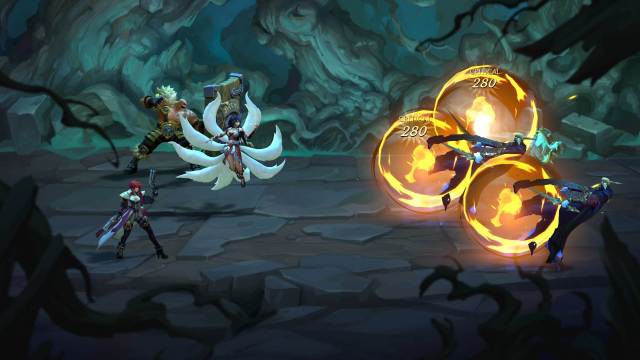 Those who want a little extra can go for the Collector’s Edition, which has an art book, vinyl soundtrack, cloth map of Bilgewater, mug, notebook and pen, and an exclusive sketch from artist Joe Madureira for $129.99. Anyone who picks up Ruined King: A League of Legends Story within 30 days of launch will get an in-game weapon for Yasuo too.

Alongside the release of Ruined King and the rhythm runner Hextech Mayhem, which is also out today, Riot Forge showed off a few of its future projects. The first is the previously announced CONV/RGENCE, a 2D action-platformer from Double Stallion starring Ekko that will launch next year.

Ruined King: A League of Legends Story is available now for consoles and PC, while Hextech Mayhem is out for Switch and PC, with Netflix coming sometime later.