No need to stay in one lane

Riot Games has spent the last several years building up numerous efforts that all came to a head now, at the tail end of 2021. Projects like Arcane and its Riot Forge publishing arm, alongside stories within games like Legends of Runeterra, are all expanding the world of League of Legends outwards. And Ruined King: A League of Legends Story is no exception.

Ruined King is published by Riot, but developed by a team that isn’t a stranger to making a role-playing game. Airship Syndicate previously got some acclaim for its work on Battle Chasers: Nightwar, and in a lot of ways, Ruined King feels like a spiritual successor. Its combat, art, and general flow instantly brought back memories of the short time I’ve spent with Nightwar.

But really, Ruined King has impressed me in how it re-contextualizes so many characters, plot points, and settings for the larger world of League of Legends. I’ve been playing League off and on since 2010. I’m well aware of who characters like Miss Fortune, Yasuo, and Ahri are.

What’s worked so well for Ruined King is how it puts these characters in completely different situations. Set in Bilgewater, the anything-goes haven for pirates and scallywags in Runeterra, you work with these characters as they all gradually come together under a shared cause. The Harrowing, a terrible and disastrous phenomenon, is set to run out from the Shadow Isles and into Bilgewater unless this ragtag group can put aside their differences and fight evil together.

The difference up front is obvious, in that it’s a single-player RPG rather than a five-on-five competitive MOBA. Rather than worrying about laning well and managing toxic teammates, you get to spend time exploring the world and seeing these characters interact. There’s a lot of dialogue, and Ruined King takes some extra time to help these champions and their world feel fully realized. 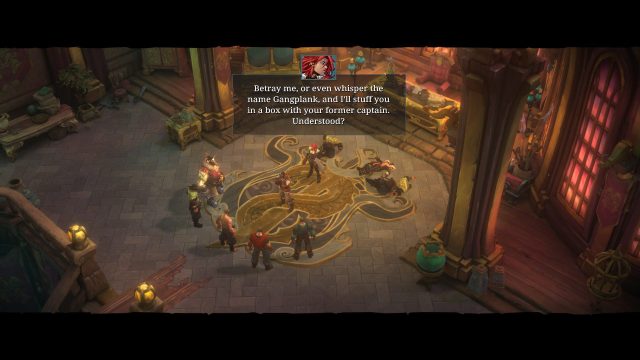 In one of the earlier dungeons, there was an entire side-story about a haunted mansion I could stumble into if I took the non-critical path at the fork. Its reward was one locket, which has admittedly been a good piece of equipment so far. But it was also some extra world-building, as I got to explore the real horrors inflicted on the folks who had once lived in Grey Harbor.

Side stories and quests like this litter the map, tucked away just off the beaten path for you to explore. If anything, I felt like it was pretty easy to miss these events. Some I walked right by, only to stumble upon later once I decided to see if I could really go into certain doors or not. These little avenues within Ruined King took me to stories about grumpy diners, missing blueprints, and a bard in dire need of inspiration.

Even the champions get a lot more depth here, thanks to having more opportunities for character writing to come through. Yasuo’s lingering regrets and issues with self-medication were a surprise, as was the simmering tension between characters like Illaoi and Miss Fortune (who is just as often referred to as Sarah Fortune here). One particular highlight was Ahri. Her story starts out with a pretty big emotional hit, diving into her internal conflict between self and nature. 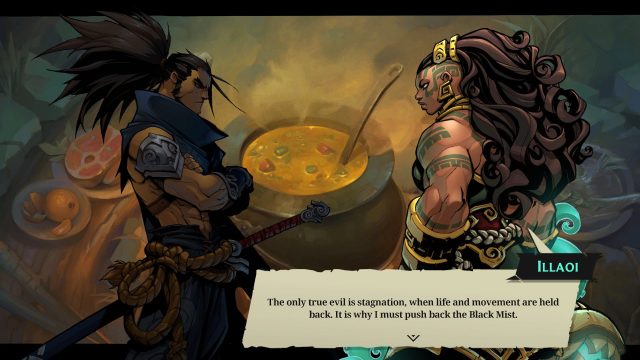 Plus, little touches help add even more onto these characters. Ahri charms people in dialogue, with the telltale pink heart zipping across when she does so, just as it does in League of Legends. In dungeons, you can perform an attack with your active character to add special effects to battle; Braum slams the ground with his shield, while Illaoi whips out a tentacle and slams it on foes.

And of course, combat in Ruined King is where it all comes together. It admittedly took me a while to click with the sheer breadth of options, both for fighting in combat and customizing moves and stats outside of combat. Ruined King is a lot denser than it first appears, but luckily that starts to fade away as you can parse out the proper nouns and look at what systems are doing.

Ruined King combat comes down to the lanes, so fitting for an RPG based on a MOBA. Characters act on a timeline, with different moves having wind-up and cooldown periods between use. Sometimes this means jetting out a protective shield ahead of a big enemy attack, or delaying an ability to ensure you can use it in the more damaging Power Lane. Different hazards and boons will slide down the lanes too, rewarding or punishing you for landing in their windows. 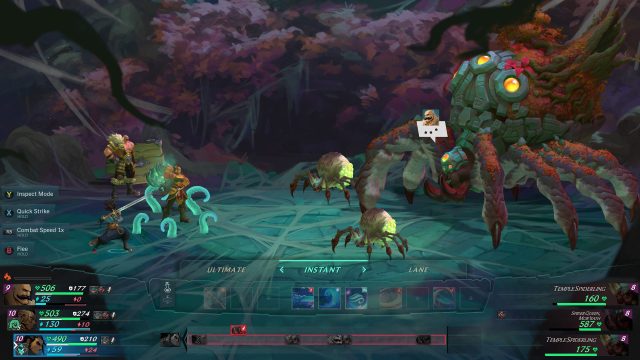 I’ve described MOBAs once as hyper-competitive RPGs, and Ruined King does a lot to prove that. Signature characteristics like Yasuo’s gathering wind and focus on critical strikes or Miss Fortune’s Strut and Tap effects translate effortlessly into RPG combat. Airship Syndicate has done a lot of work in making sure these characters play well, and feel like their MOBA inspirations too.

Illaoi is maybe the most interesting change, as she’s a bruiser in League of Legends but takes on the role of healer in Ruined King. This could have easily been fumbled, but I really, really like what Airship Syndicate has done with Illaoi for Ruined King. Her healing gaining power from the Tentacles she has out encourages a sort of paladin playstyle, dealing damage and healing in kind.

I’m still roughly working my way through the campaign, which seems modestly sized. Most estimates I’ve seen place it around 20 to 25 hours for credits, which is hefty enough without becoming an 80-hour colossus. And it seems like the side quest content is plentiful as well.

But really, what’s going to keep me seeing Ruined King through is watching these League characters interact in new and interesting ways. I’ve wondered before if projects like the card game Legends of Runeterra or the Netflix Arcane series are attempts to get players into League of Legends, and I don’t think that quite fits. Instead, there are increasingly more ways to experience this fantasy world, outside of just the MOBA.

If you don’t want to dive deep into the competitive League part, you can play the autobattler, or the rhythm-runner, or look ahead to the fighting game. Or simply settle in with what’s a pretty enjoyable RPG in Ruined King. If anything, it’s a testament to how well even more side games could work in this universe.