Tango is aiming for a spring 2022 launch

The folklore-inspired apparitions (which continue to be the biggest highlight), the cool rain-soaked city-streets setting, the crazy spell-casting animations — that’s how I would sum up Ghostwire: Tokyo before, and that’s more or less still how I’d sum it up today.

After the citizens of Tokyo are swept up by a “catastrophic fog,” the player character, Akito, becomes “partially possessed” — hence that gunk covering his face — and he’s got to fend off ghostly Visitors, as well as a masked threat named Hannya, to save his sister.

According to Bethesda’s Parker Wilhelm, Akito can wield wind, water, and fire, along with more “conventional” abilities, against the Visitors. “You’ll need to master Ethereal Weaving — a powerful art that attunes the elements with spiritual energy — alongside other equipment and ghost-hunting skills to face such a threat,” he explained in a blog post.

A little terminology and added context to latch onto: “While attempting a Core Grab, a gambit where players can pull out a Visitor’s essence at close range, the [DualSense] triggers simulate resistance as the spirit tugs against your finishing move.” 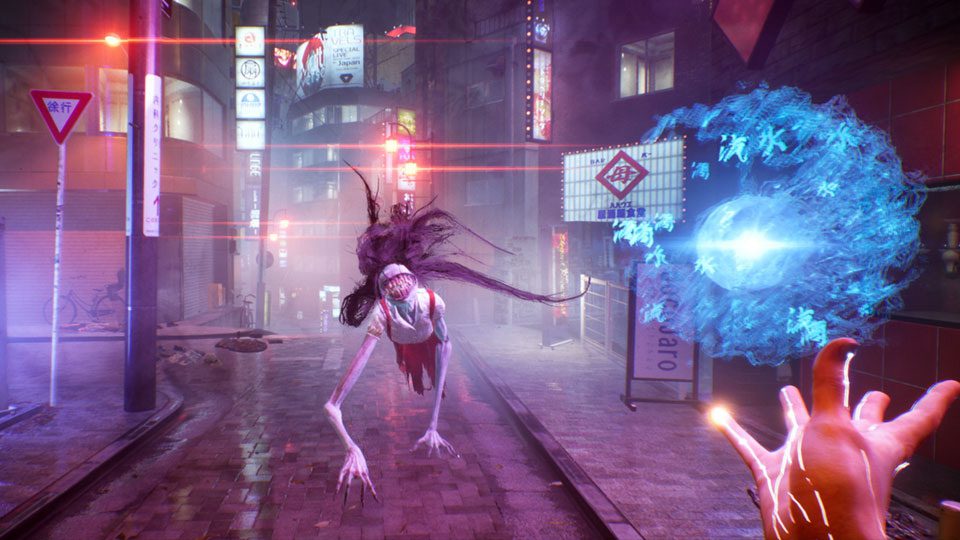 I’m sure Tango is going to get weird with this game, and that’s what we’re here for. I could use more concrete details about the combat. I’m sold on this being a neat haunted city to explore (which might actually be compelling enough on its own), I just need more convincing with these largely one-on-one fights. So many quick cuts in these videos.

That split-second shot in the trailer where Akito flings himself to the top of a skyscraper, then lassoes a ghost? Good shit. The scene with the hospital bed caught my eye, too.

Ghostwire: Tokyo is aiming for a spring 2022 release on PlayStation 5 and PC.