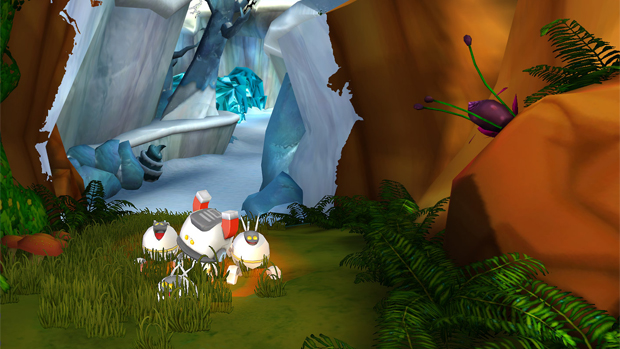 Ronimo Games, the developers of Sword & Soldiers and Awesomenauts, released today a demo for an earlier, canceled project, Snowball Earth. The demo, as explained by programmer Joost Van Dongen on his development blog, is the team’s graduation project from Utrecht School of the Arts (where Van Dongen and some members of the future Ronimo team had developed the prototype for what would become de Blob back in 2006) and their first title as a studio.

In Snowball Earth, the player controls a robot in pre-historic Earth, attempting to reverse the accidental freezing of the planet’s surface. Similar to de Blob, the robot melts snow wherever he travels and would be able to thaw creatures and objects to then use in puzzle solving. The robot is also protected by small drones which can be repelled by the player to attack enemies.

Van Dongen explains that, while Ronimo shopped the game around to several publishers, the game was too ambitious for their fledgling studio anyway and it’s probably for the best that nobody gave them a publishing deal for it. After working on Snowball Earth for a year, the project was canceled to pursue development of smaller games (leading to the development of Swords & Soldiers), much more easily accomplished by their small and inexperienced team.

It’s a cute premise and it’s a game I would probably like to play, but it seems like things turned out for the best regardless. You can download Snowball Earth and consider what might have been for yourself right now.