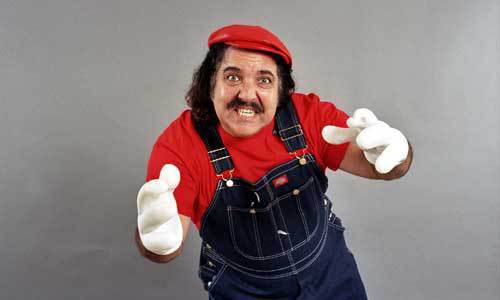 “I had never seen the video game,” says Jeremy when asked what he remembers about Super Hornio Bros. “I don’t play them at all, except when I go to Hugh Hefner’s mansion. Other than that, I never play video games ever. I think they’re boring.”

Ron isn’t done there, as he reminds us that he was a teacher before going on a rant about how video games are ruining our children’s minds. “As a former schoolteacher, Asians are kicking our ass! While our kids are drinking beer, and playing video games, Asians are getting high SAT scores,” before clarifying that there is, “Nothing wrong with video games recreationally, but our kids are living on it. You know, not even reading books anymore.”

For anyone wondering, Super Hornio Bros. was actually purchased by Nintendo to keep it from getting distributed, but apparently can be found online for those of you into piracy. Ron Jeremy certainly doesn’t care if you pirate it. “It doesn’t affect me one bit,” he said. “We were all paid.”