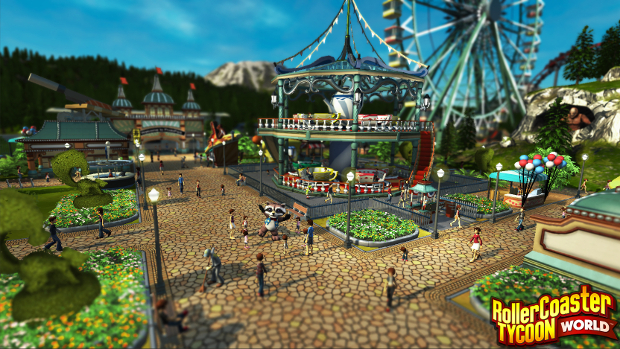 Back at gamescom, Atari announced RollerCoaster Tycoon World, a new installment to the much-loved amusement park series. However, after a 10-year series hiatus from the PC and the debut of the polarizing RollerCoaster Tycoon 4 Mobile, which was loaded with microtransactions and other annoyances, many had reservations about the potential for a brand new title.

But during a private showing of RollerCoaster Tycoon World at PAX Prime 2014, the developers along with the CEO of Atari, Fred Chesnais, were keen to show how it’s a welcome return to what made the series great. Right from the get-go, the developers at Pipeworks and publisher Atari were adamant about the title being a little more accessible while still retaining the deep customization and park management system.

Still, returning to the classic formula was a challenge, and the folks involved were open to listening to the community about what they want for the next game.

“It is a challenge to try and stay ahead of the game, if you will, to create new and exciting content for our users that expect something great,” said Atari CEO Fred Chesnais. “One hand, it’s a challenge — and we love a challenge, and if we make mistakes we fix them. The other hand we have this community that’s support is so communicative, so we can talk about it and give us input.”

As with the previous games, you’re in charge with building and managing an amusement park. It’s your job to make sure the attractions are fun, the visitors are happy, and all the while making as much profit as possible. This time around, players have more options to make their own park unique. Everything from the park environment’s setting, stylistic aesthetic (such as Americana, Sci-Fi, and Western styles), and arrangement can be freely altered and shifted without any wait.

The way people play simulators has changed since the last RollerCoaster Tycoon game on PC 10 years ago. And with the return to the PC, the developers wanted to incorporate online features. Online play is robust and very extensive. Players can observe the creation and management of another player’s park, acquire blueprints for rides, and they can even engage in four-player co-op and create an amusement park together, with each player manning their own section.

But of course, if you’re not interested in playing online, you can build and manage your park in solitude offline.

“We thought it was super important to be playable offline and to offer more than just a simple sandbox mode,” said Chesnais. “We understand that people want to play this game at their own pace, when they have the opportunity to play it. Additionally, we thought it was important for us to include co-op play. The competitive nature of so many of these games now is we see that so many people stay engaged, whether they can play co-op play environments. So we thought it was very important that they had that choice.”

One of the core goals of RollerCoaster Tycoon World was to streamline the attraction building, while at the same time giving players more options to customize and refine the park to their liking. For instance, building rides now uses a node-based construction system.

Placing a node will set the first piece of the track, and each node gives players the option to lay or remove tracks, raise or lower height, and increase pitch for turns. This allows for players to create rides quickly, but is also deep and intricate enough to give the hardcore builders enough options to make something incredibly ambitious.

Moreover, when connected online, you can visit another player’s park and request the blueprint for rides that you like. With the blueprint you can recreate and tweak their ride to your liking. And yes, you can ride the coasters in first-person view to see the death-defying results up close.

While the game is still fairly early in development, the developers at Pipeworks are making good progress so far. When it’ll be released is anyone’s guess, but what I’ve seen showed that this new RollerCoaster sim is a return to what fans expect from the series.