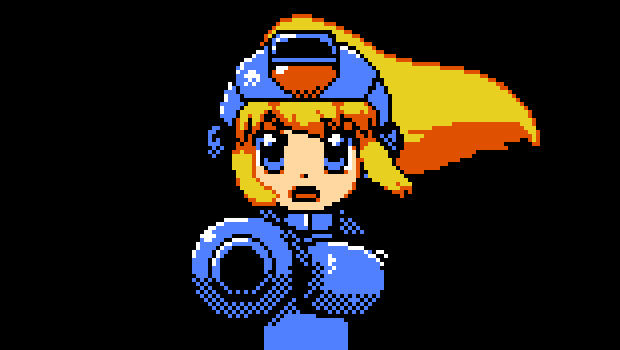 The Christmas surprises keep coming! We should count ourselves so lucky!

I’ve repeated this over and over — I’m sure you’re all quite tired of hearing my pissing and moaning by now — but this has not been a good year for Mega Man. Just when we thought 2011 would end on a downer for little boy blue, indie developer King releases an unbelievably charming Mega Man clone called Rokko Chan, a Flash game in the vein of the 8-bit classics.

King does not disguise his wholesale copying of the Mega Man formula down to the tiniest dust mote. You have an ensemble of robot villains with “-Man” monikers, facsimiles of Mega Man stock enemies like Mets and Sniper Joes, an evil scientist with a skull motif, amazing chiptune music, disappearing blocks, E-Tanks, passwords, and even a list of achievements straight from Mega Man 9 and 10. Even the name of our star, Rokko Chan, sounds similar to how Mega Man’s Japanese name is read (Rockman -> Rokku Man).

Nonetheless, this is a full-featured, free Flash game that honors the originals and adds a few twists of its own. Most obvious is that “little boy blue” is now a little girl; in addition, she can jump higher compared to her parallel dimension counterpart and can dash like X or Bass. Every now and then, something unexpected occurs, like rotating rooms straight out of Super Castlevania IV, vine swinging, and a boss battle against a robot tag team. The classic Mega Man challenge is all there, but there’s a one-hit mode for those feeling extra masochistic.

My advice before giving the game a go? Use a controller with a program like joy2key. Playing this on a keyboard is a nightmare. Other than that, enjoy this wonderful holiday treat!