I don’t just roguelike it, I rogueLOVE it

It takes a certain type of game to become an obsession for me. While I play a lot of Dota 2 and Rock Band, I would call them more of a hobby than an obsession. Super Meat Boy and Binding of Isaac, however, are examples of games that became pure obsessions for me. The design of both encourages constant play, and I found myself always looking forward to the next level thinking, “I can do it. I can do better.”

Rogue Legacy is of the same ilk. While death comes frequently and some progress is lost, you are constantly building towards something bigger and better. Likewise, with each death comes knowledge. I believe it was the American poet Kanye West who coined the phrase, “Th-th-th-that that don’t kill me, can only make me stronger.” 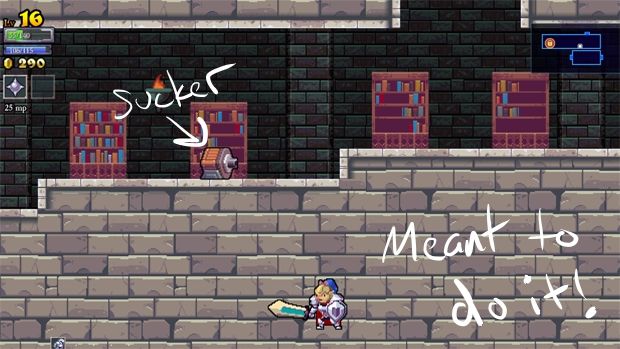 [Note: This is based off of an incomplete, early demo of the game — anything is subject to change before release]

Rogue Legacy is a “roguelite,” though I prefer not to get caught up in semantics. Just know that you’ll die and start over from the beginning a whole lot because this game is hard. The absolute genius of Rogue Legacy, however, is that every life works towards a greater goal of increasing stats and moves (specifics on that later). It’s also great that the character the player controls is an amalgamation of random traits and is always different from the character that just died.

The character traits included in this game are both hilarious and random. Near-sighted makes the outer edges of the screen blurry, Irritable Bowel Syndrome makes poots everywhere, Dwarfism makes the character extremely tiny, Hypergonadism knocks enemies far away on attacks, and there are still many more each with their own unique quirks.

There are currently four starting character classes: Mage, Paladin, Knave, and Barbarian. Each has different stats, the Mages obviously being better at magic while the Barbarians are tankier and have more HP, for example. Each time your character dies, you must choose an heir from the three randomly selected and presented to you. These characters will have a random assortment of class, traits, and one magic spell. Classes can be upgraded and eventually more classes can be unlocked via the upgrade system using coins collected through a single run. 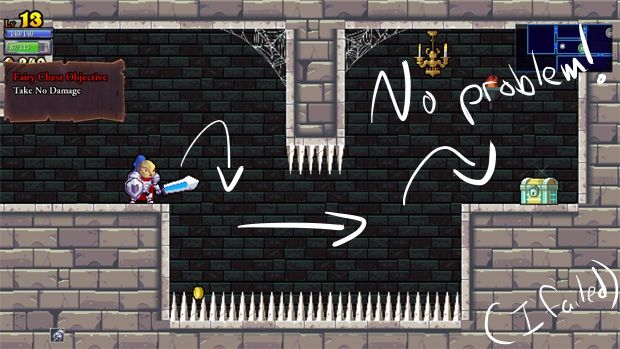 There are also Fairy Chest rooms, which act as “challenge rooms” of sorts. Occasionally, a room will task the player with a certain objective like “Take no damage.” If the goal is met while simultaneously getting to the Fairy Chest, the chest is opened and the player gets the goods. It’s a great change of pace from the jumpy-slashy-ness of the rest of the castle.

The upgrade system is great, as it allows players to work towards a larger goal in smaller increments. The gold you earn in a single run can be spent on things like upgrading HP, MP, increasing the effectiveness of classes, unlocking new classes, and generally making your future runs through the map slightly easier.

Within the general upgrade screen, you can pay for access to additional upgrades sold by three different vendors. Once the right to these vendors is purchased, they show up in the little preparation area before your character enters the actual map. The first vendor allows you to improve your armor pieces, the second grants abilities like dashing, and the third will lock the map into the same instance you just ran through. This means that if you came across a certain area that gave you trouble and killed you, you can “lock” that map and tackle it again with a second character. Otherwise, the map is completely random. You may see some rooms reused, but their layout is always different.

Ok, now allow me to gush about the absolute best mechanic in the game: Charon. 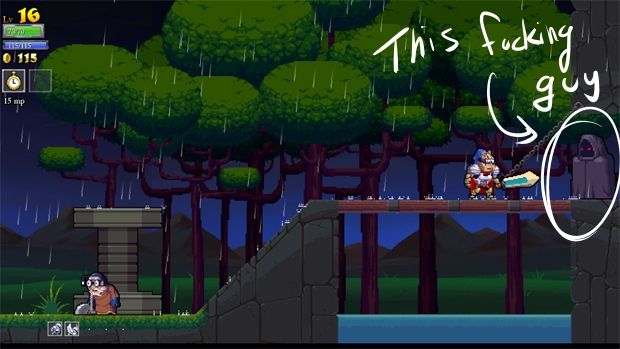 Charon is the mysterious figure that always sits outside the entrance to the castle and requires you to pay him all of your money in order to gain passage. Aptly named, given his role in Greek mythology, he ushers the player into the depths of hell, for a fee of course.  Thus, the only way to play the level is to start with zero gold or forfeit the balance to the despicable creature. While this might seem like a total bummer, in reality what it does is inspire the player to spend their gold as efficiently as possible; the less money you give to Charon, the less money you have wasted.

It’s such a smart, yet simple, design decision. Money doesn’t carry over, so spend it or else. Charon is the Mr. Resetti of roguelites/roguelikes/rogue-rogues. He alone transforms what is already a great game into an amazing one, by taking all of your money in the vein of a high school bully. I love it.

Rogue Legacy has a lot going for it, and you should be more than excited.