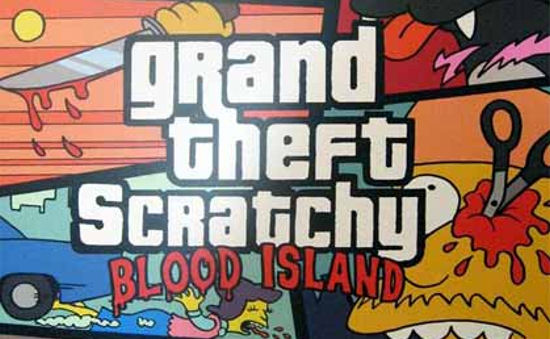 Yes, you read that right. Rockstar Games, makers of the Grand Theft Auto series — a franchise famed for its merciless parodies and satire — apparently complained to Electronic Arts about The Simpsons Game and its Grand Theft Scratchy level. Game designer Greg Rizzer said that elements of the level had to be removed because of Rockstar, as surprising as that sounds:

“I was always under the impression that when you do parody, it’s a sign of respect… If we make fun of Grand Theft Auto, we’re not going to hurt the sales of Grand Theft Auto… But yeah, we’ve definitely had some reactions – we’ve had to pull stuff from the game”

Who knew that the most controversial games developer in America could dish it out but couldn’t take it? Perhaps it should tone down the amount of mockery in the GTA series if parody suddenly isn’t cool anymore. Whether it actually was someone within the company or just a heartless lawyer, we’re not sure, but at least Harmonix has a sense of humor:

“I don’t know if you’ve seen Sitar Hero? We did Apu playing this 60-button controller and songs like Pour Some Curry On Me – we made this wonderful parody poster and the guys from Harmonix loved it and we sent them 20 copies of the poster. They just loved it so much.”

Rockstar either needs to grow a set, or fire the whiny jerk who griped. Either way, it reflects very badly on Rockstar that the Manhunt and GTA creators stomped its feet over harmless parody. That developer, of all developers, knows what it’s like to have to cut material from a title.