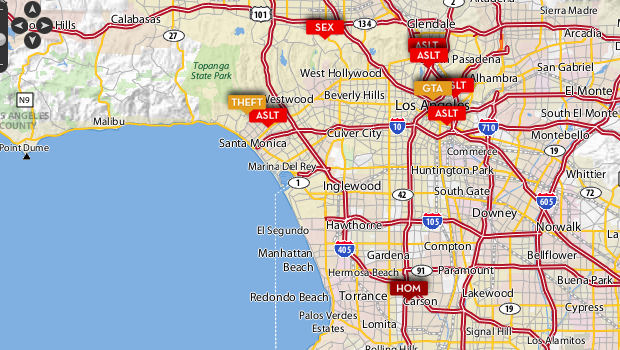 L.A. has lots of crime happening in it, as cities often do, so why not make a fun little web gimmick out of it? Rockstar has launched a “Crime Map” of the city to prepare us for L.A. Noire‘s release, and it’s actually quite cool.

If you’re unfamiliar with the concept of a Crime Map, it’s a full-on map of the city, with little flags pointing out where crimes have happened. If you click on a flag, you get an original news clipping from ye olde days, explaining what happened. There are a number of quite bizarre ones.

The L.A. Noire themed map contains all the nefarious deeds perpetrated in 1947, the year the game is set.

The crimes range in severity from theft to homicide, and more are to be added to the map as time goes by. Check it out. It’s oddly compelling.