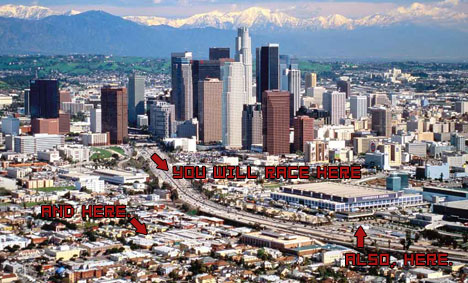 No doubt inspired by Summa’s recent relocation, Rockstar games has announced Midnight Club: Los Angeles for the PlayStation 3 and Xbox 360.

There’s not much information on the game, as the press release (which you can read after the jump) couldn’t be more vague. I’ve decided to extract the important information for Destructoid readers, so that we can all get a better sense of what to expect from Rockstar’s next-gen racer:

– The game will “once again push boundaries and expectations,” re-defining the experience of street racing.
– Rockstar San Diego will define what PlayStation 3 and Xbox 360 games should look like, because they’re talented.
– They will re-define the racing game experience, both offline and online.
– Street racing culture in a video game? Totally re-defined.
– Rockstar says the game is going to be good. In fact, it’s going to re-define the meaning of good.
– Did I mention that some stuff is going to get re-defined?

The game will be available in early 2008 and will most like re-define the year.

“Midnight Club’s addictive blend of freedom, style and sheer sense of speed sets it apart from its competition,” said Sam Houser, Founder and Executive Producer of Rockstar Games. “With Midnight Club: Los Angeles, Rockstar San Diego looks to once again push the boundaries and expectations of what a racing game can be. Rockstar San Diego has always been the technology leader in delivering the ultimate racing experience, and with this game, they are looking to re-define the idea of a completely immersive racing game experience, both offline and online.”

“On prior consoles, the Midnight Club franchise continually raised the bar for racing games, evolving from being the first ever street racing game to setting the defining standard for credibly integrating street racing culture with an intense racing experience,” said Jay Panek, Producer of the Midnight Club series. “With Midnight Club: Los Angeles, our goal is to evolve on all possible levels and stay true to the hardcore gaming experience the series is known for, while making it accessible to casual gamers and car enthusiasts.”

Consistently the most innovative, highest-rated street racing franchise, Midnight Club set the standard of what an open-world racing game can be. Midnight Club: Los Angeles will deliver a truly immersive next-generation racing experience that is second to none.