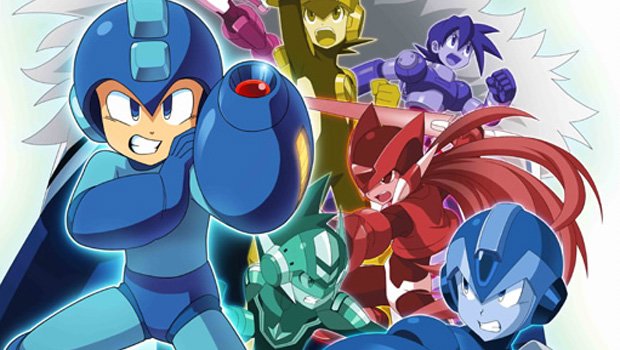 Guys, I owe you an apology. The other day, I wrote about a fan-driven Mega Man Legends concept album, and I begged you all to stay on topic and not go off on a tangent about how you felt Capcom wronged you. I apologize because, right now, I’m about to become a big, honkin’ hypocrite.

Capcom has finally announced its software plans for Mega Man‘s 25th anniversary. Rockman Xover (read “Rockman Crossover”) gathers heroes and villains from across the franchise’s myriad sub-series for an RPG adventure. According to the story, Dr. Wily, Sigma, and other baddies have confined all the Mega Men in a pocket of space-time, so it’s up to Drs. Light and Cossack to construct a new robot. However, you have to assemble the Mega Man yourself, in effect customizing it however you see fit.

That’s just great. Relegate the once lofty Mega Man empire to the mobile realm for its 25-year celebration. I don’t give two shits about how “valid” the iPhone is as a gaming device; the truth is that many companies still treat the platform as a dumping ground, Capcom included. From the available screens, it looks to be running on the same engine, sporting the same art style, as the infuriating Mega Man X iOS port. Considering what a disappointing turd that was, I have zero hopes for Xover.

Rockman Xover is looking at an autumn release in Japan, yet I’m certain it’ll make it Stateside soon afterwards. Obviously, this is what we’ve all been waiting for. Here you go, fellas! No grand series revival or compilation discs, a la Kirby’s Dream Collection or even the Classic and X collections on the PS2, GC, and Xbox! Nope! Have some iPhone garbage and say it tastes like Grey Poupon!