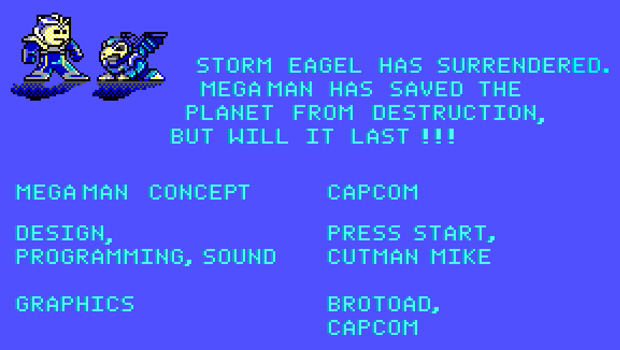 Capcom insists on seeing this construct through to the end, so I might as well keep abreast of the latest news and developments.

First up is this fan-made Rockman Xover Flash demo that recreates the TGS build Conrad played. It’s got everything: filtered-to-Hell sprites, the “Auto Play” button, and a “win” button to skip past the impossible-to-lose Storm Eagle battle. Built in under 24 hours, it nails down Xover to the letter.

In serious news, Famitsu has pulled back the lid on more details for the upcoming iOS social RPG. Returning from the Classic series in a navigator capacity is Kalinka Cossack, daughter of Mega Man 4‘s Dr. Cossack. There’s also a screenshot of protagonist OVER-1 battling Cut Man, finally proving that you won’t only be fighting enemies from X1. Each stage in the game consists of a set of quests, and by collecting “Map Parts” in the stages you’ll earn the chance to battle a Master Boss, which yields better rewards than normal bosses.During Team Battle Mode, you and several teammates join forces to take down a boss; the twist here is that the boss won’t attack you, rather the object is to defeat it as quickly as possible before it runs away like a coward.

You can check further deets at the Protodude’s Rockman Corner link below. I doubt any of these tidbits will change your outlook on the game, but eh.