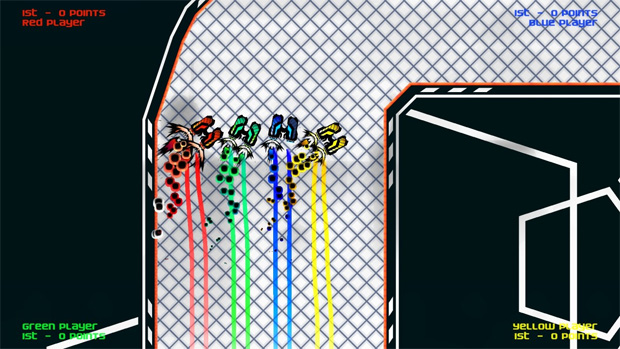 You know, a few short months after Xbox LIVE Community Games launched, my interest in the channel sort of dropped to practically zero. The only time I hear about the indie games on the service is when friends recommend something, which some of you can probably relate to.

And that’s exactly why I wanted to emphasize Halfbrick‘s upcoming Community Game, Rocket Racing. Simply put, it looks good. Damned good, even. As the name implies, it’s a racing game, obviously, but what sets it apart is undoubtedly the title’s simplistic nature.

There’s a nice trailer located after the break which will help explain things, and I urge everyone to check it out. No word on a release date yet, but we’ll surely keep you posted.

July 1st, 2009 – After Halfbrick Blast Off and Halfbrick Echoes made their critically-acclaimed mark on the Xbox Live Indie Games service, developer Halfbrick is on the warpath again, showing off its new futuristic multiplayer racer – Halfbrick Rocket Racing. At first glance, it seems to be presented in a traditional top-down format, but there are two notable twists which simplify the learning curve and ensure fun, intuitive gameplay.

Control of each racing craft is actually handled with just two buttons – the left and right analogue triggers. They power the left and right rockets respectively, so movement is simple – press both at once to move forward, and alternate power to each for turning. Players will be able to customise their controls to find the configuration that suits their playing style, including using the left analogue stick.

Hitting the best racing line and cutting corners won’t always be the best way to win. Players will actually gain a significant speed boost by positioning the rockets against the walls and corners for extra thrust power. The concept is explained via a simple tutorial system in the game, and players will eventually be sliding and boosting around each level with high speed and extreme precision.

Gameplay is focused on shaving seconds off your best times, reminiscent of the legendary Trackmania series. Players can upload their best times on over 40 tracks to the Global Leaderboards and see where they rank among the world’s best. Local multiplayer is available with up to four players taking control of a rocket racer, drifting around corners and sprinkling the course with colorful glowing trails – a simple yet incredibly engaging graphical effect.