Namco Bandai seeks to appeal to your dawww factor today with the release of puzzle platformer Rocket Fox on iOS. The game is entirely accelerometer controlled, and the gameplay experience is basically in the same vein as Jumping Flash and Aaaaa A Reckless Disregard For Gravity, albeit much more bite sized.

In addition to the dawwness, the main character’s name is Guy Fox, which should make a few of you anthropomorphic pun lovers out there chuckle a bit. As for the game itself, as long as motion controls don’t scare you off, a free demo awaits your perusal on the App Store. 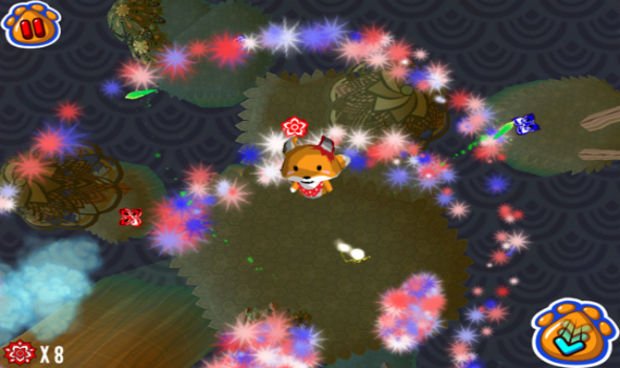 At the core, Rocket Fox‘s setup is pretty standard mobile puzzle fare: you have a selection of different levels to tackle one at a time, earning rankings and rewards as you conquer them. In each level, there are a bunch of petals scattered about the landscape — once you jump/land on all of them, you move onto the next level.

Different color petals send you into the air at different heights, and some petals has special properties, like the ability to blow up other petals in proximity, forcing you to adjust your strategy on the fly (literally). If you’re feeling brave you can push the “down” arrow (the only button available on-screen) to slam into the ground, but if you smash to your death, you have to start the entire level over again.

On paper Rocket Fox is a decent way to spend the afternoon, but two core issues that impede my enjoyment of the game are the finicky motion controls, and at times, the frame rate. While I’m normally completely fine accelerometer controls (see Tilt to Live), it’s extremely frustrating to see Fox slightly miss a petal because I wasn’t holding the device exactly right.

The way Tilt to Live solved this issue is by offering a number of different ways to hold the device, as well as a host of calibration options. Other than the ability to invert the accelerometer, Rocket Fox has none of that, which makes it hard to play in a number of different relaxing positions. The frame rate issue isn’t a consistent problem, but when drops happen they’re usually at the peak of a huge jump, which impedes my ability to work my way downward, and can screw up a run.

However, when the controls work, the game is actually quite fun. It’s a simplistic way to enjoy the rush of vertical platforming, which in my opinion, is a fairly underrepresented genre these days. With the exception of (Force = Mass x Acceleration), there really aren’t a whole lot of marquee vertical games on the iOS platform, so one more isn’t exactly flooding the market.

Like every other mobile release these days, Rocket Fox has micro-transactions available, which allow you to purchase extra firework currency for in-game cosmetic items. Thankfully, most of the items don’t directly influence the game, so this system is basically just for the truly dedicated. So is the game worth checking out? Well, at the very least, the demo is free, so it’s worth a few minutes of your time if you’re curious.