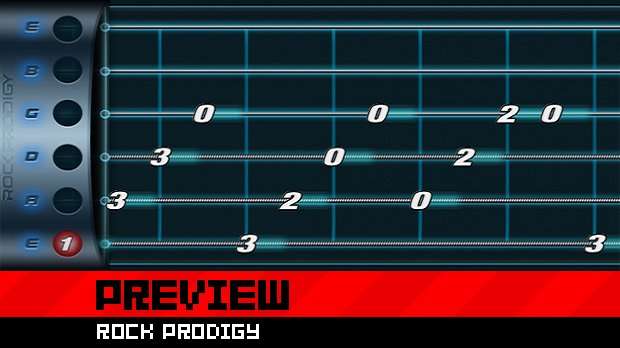 On the heels of this week’s Rocksmith announcement, I feel I should introduce another player to the line-up of games that promises to teach you real life skills.

Rock Prodigy is an iOS app that has been available on the App Store for weeks now, though it may have flown under your radar unless you were specifically looking for it. I got a chance to demo the app last week and came away nothing short of impressed.

At first glance, Rock Prodigy might seem like another Guitar Hero clone. That skepticism quickly fades though, when you realize it’s not really a game – it’s a learning tool. It just so happens that its selling point is that it uses a real guitar. Any guitar can be used, in fact – even acoustic – so long as you have a headset with a built-in microphone or a basic line-in guitar adapter with a headphone jack and guitar cable input to connect to your iOS device. 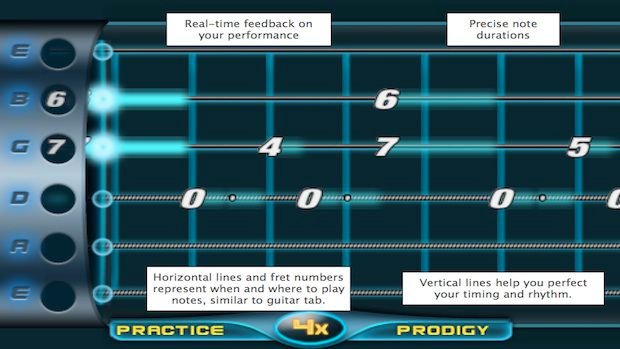 Roger Danneberg, a Computer Science PhD at Carnegie Mellon, is partly responsible for creating the polyphonic pitch recognition software used in the app, which can detect frequencies small enough to distinguish when an incorrect note or chord is played. This technology forms the basis of the software, but the developers did incorporate some fun gameplay elements to the app similar to those in other guitar games.
In the basic version of the app, users have access to only the Perform mode, which offers a simple, straight playthrough of the song. How well the player performs ultimately determines their score and subsequently, their Career.
The Premium Feature Pack, which is available as an add-on for $9.99, features a Practice mode which seems quite reasonable for the price. It allows you to fast-forward and rewind songs, turn on note and chord names to help in learning music theory, and adjust guitar backing or track volume. It also grants you access to the app’s Auto Pause feature, which is arguably the most important tool for true beginners.
It temporarily pauses the song when you don’t hit a note on time, and then picks the song back up when you play the next note. So, if you’re anything like me and it takes you 5 seconds to find the C note, your progress won’t be stunted by the realization that you’re now 5 seconds behind. Practice mode also features an Auto Play option that lets you hear the track as though you played every note correctly. Sometimes it’s just nice to pretend, isn’t it? 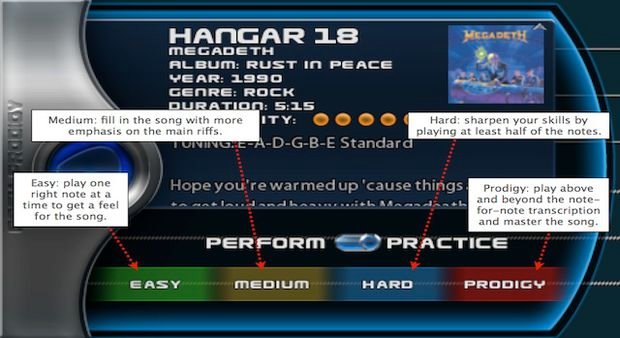 As you begin to improve in Perform mode, your score will get higher. Users have the option to save scores to their profile so they can track their improvement over time or compare themselves to other players on the global leaderboard.
Rock Prodigy offers over 40 tracks available for purchase as of now, which are priced from $1 to $3 and are typical of what you would find in any guitar peripheral game, but with a bit more variety. The artists range from Lynyrd Skynyrd to B. B. King to the Deftones to Bach. I will admit I was impressed by the inclusion of classical music, though I can’t imagine how it would sound on an electric guitar. A complete list of all the songs can be found on the app’s website. If none of them are your particular flavor, note that the developers are continually adding new songs to the store.
Each song has four levels of difficulty: Easy, Medium, Hard, and Prodigy. Playing a song on Prodigy is equivalent to mastering it, which means not only mastering every note, but playing above and beyond the note-for-note transcription and learning various ways to incorporate multiple parts of the guitar.
I demoed the app on an iPad, which is surely the optimal way to view it. It still looks great on an iPhone or iPod, though, and would have been especially useful last summer during my fruitless attempts to learn guitar. Missed opportunities aside, Rock Prodigy seems like a fun, useful, and worthwhile method of learning the guitar for a totally reasonable price.